Flooding in Haiti, caused by Hurricane Tomas, has heavily affected the cholera-infested region of Artibonite, where the first cases of the water-borne disease were diagnosed.

The Artibonite river has been swollen by the rains brought by the storm and there are fears that the floodwaters could be contaminated with cholera.

Cholera has killed 501 people and sickened more than 7,000 others since the first cases were confirmed in Haiti about two weeks ago.

“The storm has passed, now we are bandaging the wounds that the storm has left, but the cholera epidemic is continuing, especially since the situation has gotten worse because on one side we have the rivers that will carry the bacteria everywhere, and on the other hand, we have the people who have been displaced that could also carry the bacteria,” Rene Preval, the president, said on Saturday.

However, some are sceptical about the impact of the outbreak.

Al Jazeera’s Imtiaz Tyab, reporting from the capital, Port-au-Prince on Sunday, said Haiti’s minister of health had claimed that non-governmental organisations were exaggerating the spread of the disease.

“He [the minister] went on to suggest that he thought it was a way for them to attract more donations to fund cholera projects or projects to fight cholera,” our correspondent said.

“Haiti has for a very long time had a very complex relationship with NGOs. In fact, there are more NGOs operating out of Haiti than anywhere else in the world per capita. These NGOs have an astounding amount of money and have also spent a lot of money here. But many Haitians say that they have very little to show for it.”

However, Trish Morrow, a representative of Mercy Corps told Al Jazeera’s Sebastian Walker that the situation is dire and that there has been no exaggeration of the situation.

“The cholera crisis has not finished as yet,” said Morrow. “The illness is spreading from one village to another. Yes, indeed, a lot of people are working very hard, in the government to the NGOs, to stop the epidemic from spreading.”

Morrow did not comment directly on the health minister’s claim, but defended the work of the NGOs.

“I could not say that progress could have been quicker because I have known where there have been disasters in developed countries, it has taken years to rebuild after such disasters,” said Morrow.

“So why should we expect Haiti to be able to rebuild its infrastructure so much more quickly than any other nation … if any nation was affected by a disaster of the scale of the earthquake, and now the cholera and the hurricanes, which have afflicted Haiti year after year after year, it is a very, very big task to rebuild a country.”

Tomas skirted Haiti on Friday, flooding some coastal towns and forcing thousands from their homes.

Camps housing survivors of January’s earthquake in the capital were soaked, but the storm’s impact was not as bad as many had feared it would be. 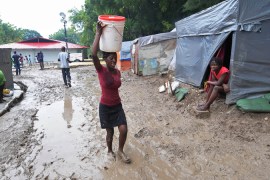 Officials warn of mudslides and disease as Hurricane Tomas – downgraded to tropical storm – moves into the Atlantic. 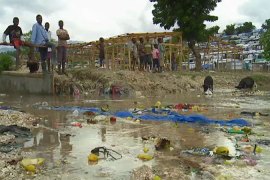 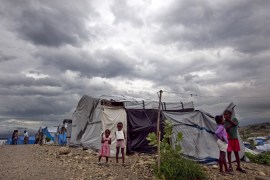 Deaths in wake of Haiti hurricane

Seven people killed as Hurricane Tomas lashes Caribbean country with fierce winds and rain before moving on to Cuba. 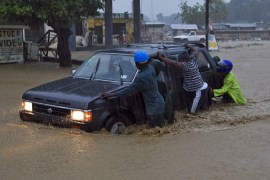