Indonesia has buried the victims of Mount Merapi’s violent eruption, most of whom were laid to rest in a mass grave in central Java.

Volunteers and soldiers prepared a mass grave for about 20 of the victims in the village of Sidorejo, south of the mountain, on Thursday. Others were laid to rest in private ceremonies.

Most of the volcano’s 33 victims died of burns or suffocation as searing ash and clouds of heated gas spewed out of the crater around 6pm [1100 GMT] on Tuesday. Many were found huddled together in their homes.

People across Java were paying their respects to an elder known as Grandfather Marijan, the royally appointed guardian of the mountain who ignored orders to leave and died as he prayed at his
home on the volcano’s slopes.

“He is the most respected person here,” Ani Wijayanti, a local resident, told the AFP news agency.

“He was like a boat captain who would never surrender although he must pay with his life. He didn’t want to compromise his principles although thousands of people left this place to safety.”

Many more almost certainly would have been killed had the government not issued a maximum red alert warning of an imminent eruption on Monday and ordered people to evacuate a 10km zone around the mountain.

While government volcanologists said Merapi had been relatively quiet since the deadly eruptions, authorities are warning thousands who fled the area not to return. There are fears the volcano’s dome could still collapse, which would cause a huge blast of blistering gas and an avalanche of the debris trapped beneath the dome.

Inside the danger zone on Thursday, the landscape was a picture of devastation as rescuers continued to search for survivors. Houses were left flattened and burnt, leaves and branches were burnt off trees and thick grey ash covered everything.

Step Vassen, Al Jazeera’s correspondent close to Mount Merapi, said that thousands of people had run away from the volcano.

“They are trying to find a safer place. They are going to the refugee centres that have been set up by the government,” she said.

Vassen said residents were reluctant to leave the area for fear of leaving homes and livestock unattended for a false alarm.

The 2,914-metre Mount Merapi is the most active of the 69 volcanoes with histories of eruptions in Indonesia. It last erupted in June 2006, killing two people.

Indonesia straddles a region where the meeting of continental plates causes high seismic activity. It has the world’s largest number of active volcanoes and is shaken by thousands of earthquakes
every year.

A 7.6-magnitude earthquake last year in Padang killed about 1,100 people, while the 2004 Asian tsunami, triggered by a 9.3-magnitude quake along the same fault line, killed at least 168,000 people in Indonesia alone. 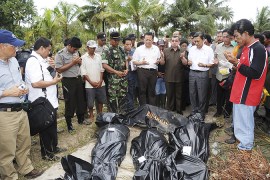 Number of dead reaches 369 as questions are raised about the failure of an early tsunami warning system. 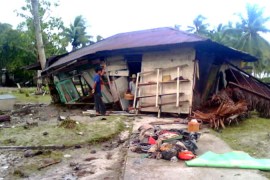 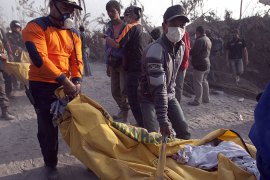 At least 29 people killed as the country’s most volatile volcano erupts and continues to spew ash and rocks. 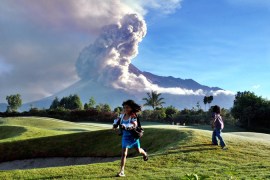 Indonesian authorities tell 19,000 residents living close to Mount Merapi to leave as it threatens to erupt.