A suicide car bomber and three armed fighters attacked a United Nations office in the western Afghan city of Herat, but security forces killed the attackers and no UN employees were harmed, officials have said.

The Afghan ministry of interior, however, said on Saturday that three guards working at the compound were injured.

“The situation is now resolved,” Dan McNorton, a spokesman for the United Nations Assistance Mission in Afghanistan, told the Associated Press.

“All UN staff have been accounted for.”

The attack, for which the Taliban claimed responsibility, began when four fighters drove up to the UN compound in a car laden with explosives, according to Dilawar Shah Dilawar, deputy police chief of Herat province.

Dilawar also said they fired a rocket towards the entrance from the car.

The fighters tried unsuccessfully to blow up the gate with the rocket so they could drive the car inside the compound, he said. When that did not work, three of the fighters got out of the car and the fourth blew up the vehicle, killing himself. The explosion destroyed the gate, allowing the three to get
inside.

“The three attackers were wearing police uniforms covered with burqas,” Dilawar said, referring to the long, flowing garment that many Afghan women wear in public.

Al Jazeera’s James Bays, reporting from the capital, Kabul, said that the UN has condemned the attack.

“They are also relieved none of the staff have been harmed in what was initially a confusing picture,” he said.

The attack was similar to one in July in Kunduz in northern Afghanistan. Taliban suicide attackers used a car to blow a hole in the wall of a compound of a contractor for the US Agency for International Development in an attack that killed a British national, a German and two Afghans.

Herat, Afghanistan’s second biggest city, is near the border with Iran and has until recently been relatively peaceful.

However, residents have said that the road to the local airport is controlled after dark by criminal gangs and some districts of the city, notably those dominated by ethnic Pashtuns, are reportedly controlled by Taliban fighters. 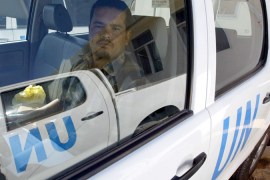 UN office in Herat ‘under attack’