Further details of the settlement were not released by the court or Xe.

Dozens of Iraqis had accused the company of behaviour that led to a culture of recklessness and illegality, including the deaths of several people, and sought compensation through the courts.

In one cited case, 17 Iraqis were left dead in 2007 in Nasoor Square in Baghdad, the capital, after alleged shooting by personnel from the security contractor.

“I feel like I achieved victory against the Blackwater firm,” Hassan Jabir, a lawyer who was injured in the Nasoor Square incident, said.

Jabir added that the victims’ families and those wounded in that shooting met lawyers in a Baghdad hotel about a week ago.

The lawsuits also included the killings of three people guarding the Iraqi Media Network in February 2007 and the 2006 killing of an Iraqi guard, amongst others.

The firm has faced intense scrutiny in the US and Iraqi chambers of government in past years.

Last week, a US federal court dropped the charges against the five contractors accused for the 2007 shooting deaths.

Nouri al-Maliki, the prime minister, has said that Baghdad will still bring them to account, but many Iraqi’s see that decision as a further indication that foreign contractors in the country have been allowed to act above the law.

Meanwhile, two former Blackwater contractors have been arrested on murder charges following the killings of two Afghans in 2009.

An indictment charges 27-year-old Justin Cannon and 29-year-old Chris Drotleff with second-degree murder, attempted murder and weapons charges. Both of them are in custody.

Both Cannon and Drotleff have said in recent interviews that they were justified when they opened fire on a threatening vehicle last year. Blackwater fired both men after the shooting for failing to comply with the terms of their contract. 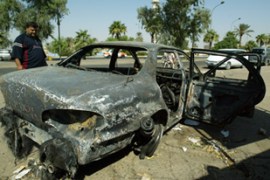