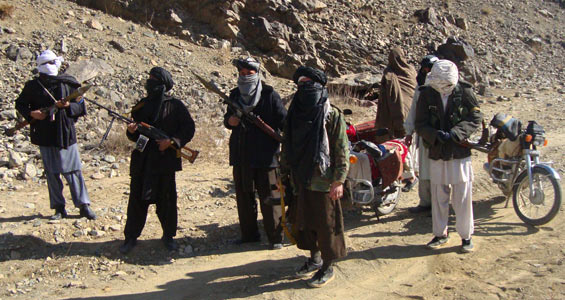 As Western leaders consider possible exit strategies from Afghanistan, a plan for encouraging Taliban fighters to lay down their weapons in return for money and jobs has several times been suggested.

Hamid Karzai, Afghanistan’s president, has said that peace must be reached “at any cost” and the scheme, which it is thought would cost between $500m to $1bn over five years, has prompted some furious policy debate.

Its critics argue that the West should avoid engaging the Taliban, especially when the conflict in Afghanistan is going so badly for the US and its allies leaving the group in a strong negotiating position.

For their part the Taliban has in the past rejected talks until foreign troops leave the country.

But while US-led forces ousted the Taliban from power in Afghanistan in 2001, the West has been more conciliatory to the Taliban in the past.

The prospect of dialogue is not an alien concept – in December 2007, Kabul expelled two EU and UN envoys, accusing them of making contact with the Taliban.

The Taliban emerged in the 1990s as a Sunni movement of Pashtun tribes and their supporters.

The group took Kabul and established their rule, including enforcing their interperatation of Sharia, or Islamic law, in Afghanistan in 1996, amid the civil conflict that had erupted in the wake of the Soviet defeat and withdrawal from the country.

In those early days, Western observers saw a group that appeared to be ready to bring an end to the corruption and chaos in Afghanistan.

The Taliban government was only ever officially recognised by the Pakistan, the UAE and Saudi Arabia.

But, in 1996, after the group had taken power, the Taliban were engaged by US oil company Unocal, which hoped to build an oil export pipeline through Afghanistan.

For their part, the Taliban saw in the plan an opportunity to gain greater recognition from the US.

Abdul Rashid Dostum, the Uzbek militia leader, visited the US at the oil company’s behest and visits from other Taliban officials followed.

But the plans attracted criticism from human rights groups that objected to an American oil company’s dealings with a group known for its repressive social policies and was abandoned.

Meanwhile, Afghanistan which under the Taliban was recovering from years of war, continued to recieve aid from Western governments and non-governmental organisations (NGO) until 1998, when the Taliban order the NGOs out of Afghanistan.

That year also saw the bombings of US embassies in Tanzania and Kenya by allies of Osama bin Laden, the al-Qaeda leader, who had taken sanctuary in Taliban-ruled Afghanistan, prompting a US missile attack on the country.

The UN imposed sanctions in 1999 and 2000, hopping to pressure the Taliban into handing over bin Laden, and following the September 11, 2001 attacks on the US, American officials met Taliban representatives to demand that they surrender the al-Qaeda leader.

The Taliban’s refusal precipitated the US-led invasion that brought an end to the group’s rule.

But more recently, as public support for Western efforts in Afghanistan has faltered, officials have moved to re-engage the group, arguing specifically that low-level Taliban supporters could be persuaded to lay down their arms.

In July last year, Hillary Clinton, the US secretary of state, told an audience at the US Council of Foreign Relations that it would be worth separating die-hard Taliban supporters from those less ideologically inclined.

On a trip to India earlier this month, Robert Gates, the US defence secretary, reiterated that sentiment saying that “we may see a real growth of reintegration at the local or district or provincial level”.

Even amid the conflict, Western powers have had some success engaging the Taliban.

In 2007, the British managed to bring Mullah Abdul Salam Zaeef, a Taliban commander, on side, giving him the governorship of the Musa Qala district, though he has subsequently been accused of corruption.

But critics are wary, arguing that the time for such deals has been and gone, and that after nearly a decade of conflict, the Taliban has moved closer to al-Qaeda, pointing to the increasing use of al-Qaeda-style tactics such as suicide bombings.

But the near 10 years of conflict has wrought changes on the Western forces in Afghanistan too, and the move towards engagement may be driven, as Karzai said, by a desire for an end to the fighting “at any cost”.

Asked this week whether he believed the Taliban could play a role in the future government of Afghanistan, General Stanley McChrystal, the commander of the US forces on the ground in Afghanistan, said: “I think any Afghan can play a role if they focus on the future, not the past.”