“And so I don’t think it’s the place of the United States or any other outside country to resolve these kinds of problems for Iraqis because they are demonstrating they are more than capable of resolving it for themselves.”

Biden’s visit underscores Washington’s concern that the growing sectarian tensions could seriously mar the election, which has been seen as an important step in healing Iraq’s wartime divides and allowing the US to accelerate troop withdrawals.

Nasser al-Ani, Iraq’s presidential spokesman, said Iraq was willing to listen to suggestions on easing the political standoff caused by the blacklist, but “nobody can interfere in Iraqi affairs … Biden or others”.

Ali al-Dabbagh, a spokesman for the Shia-led government, also drew a clear line on outside views over Iraq’s efforts to identify and weed out suspected supporters of the outlawed Baath party, headed by Saddam Hussein, the former Iraqi president.

“It is an internal affair that should be discussed by Iraqi political entities,” he said.

The list of banned candidates was drawn up by a panel charged with preventing high-ranking Baathists from returning to public life.

The names included Saleh al-Mutlaq, a popular Sunni politician, which triggered protests from minority Sunnis who complained that majority Shias were trying to marginalise them.

The panel’s ruling, which was upheld by Iraq’s independent electoral commission, still faces a court challenge.

Talabani said there would be a meeting in the coming days between the presidency, leaders of parliament, heads of the judiciary and al-Maliki to “find a legal and constitutional solution” to the row over the banned candidates.

The incident raised concerns about Iraq’s fragile security with the parliamentary election less than seven weeks away. 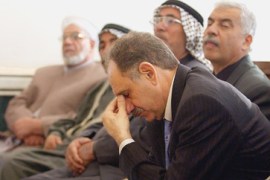 Banned from running in the elections, the head of the National Dialogue Front joins the show. 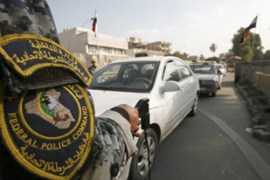 Police and soldiers among the 30 people injured after a blast in the city of Mosul. 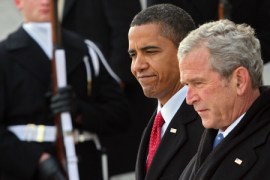 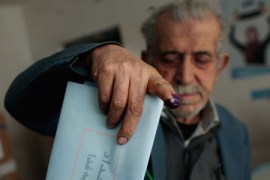 More than 600 candidates have been barred from participating in upcoming elections.