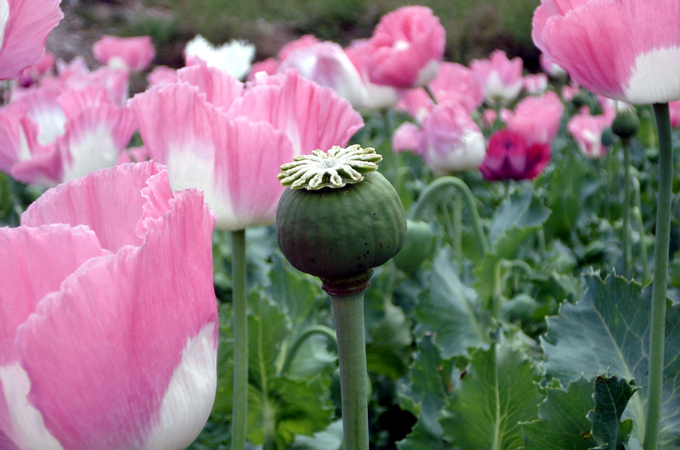 Poppy fields, like this one in Kandahar, provide income for nearly 250,000 Afghan families [EPA]

Poppy production in Afghanistan plummeted by 48 per cent this year compared to 2009, according to the United Nations – but mostly because a blight destroyed thousands of hectares of the crop.

Afghanistan will produce roughly 4,000 tonnes of poppy in 2010, and the crop will provide a livelihood for nearly 250,000 families. It will be a lucrative one, too: The price of poppy increased markedly, with one hectare of the crop yielding $4,900, up from $3,600 last year.

The data comes from an annual report released on Thursdayby the United Nations Office on Drugs and Crime. Yury Fedotov, the agency’s executive director, called it “good news,” but cautioned that production could increase next year if Afghanistan remains blight-free.

Cultivation, rather than production, is a better measure of the popularity of the crop among Afghan farmers and the area under cultivation remained unchanged compared to last year.

Cultivation dipped slightly in southern Afghanistan, particularly in Uruzgan and Zabul provinces, where it fell by 20 per cent and 58 per cent, respectively.

In other provinces, though, it expanded significantly. Farmers planted 2,039 hectares of poppy in Nimroz province in western Afghanistan, up from just 428 last year; in Nangarhar, cultivation increased to 719 hectares, a 145 per cent increase from last year.

Somewhat counter-intuitively, the sudden drop in production could actually have negative consequences for Afghanistan.

One is a potential “rebound effect” – if prices remain high, they could drive more farmers to plant poppy, thus increasing production.

“This dramatic increase is a market response to the drastic reduction in opium production,” Fedotov said.

“The objective of increasing the number of poppy-free provinces is now under threat, because of the high market price.”

Nato and the UN have tried to make other crops competitive with poppy, the source of opium, but they have struggled to convince farmers to switch. Lower prices are one reason why. A hectare of wheat, which yielded $1,200 last year, will fetch only $770 this year, the UN said.

Twenty provinces in Afghanistan are poppy free, including most of the north. The bulk of the country’s cultivation takes place in just nine provinces, largely in the south and west.