At least 14 people have been killed in bomb blasts at the main airport in Mogadishu, the Somali capital, witnesses have said.

Witnesses said a car blew up near the airport gates shortly after Sharif Ahmed, the Somali president, flew out. At least two suicide bombers then blew themselves up near the terminal.

Ali Mohamud Rage, a spokesman for the anti-government group al-Shabab, claimed responsibility
for the attack and said it was aimed at a high-level meeting of UN, AU and Somali officials taking place at the airport.

Dahira Kheyrow, a female beggar, said two of her fellow beggars were among those killed. She said she fell to the ground after the car bomb went off.

“I stood up and tried to run again. Gunfire began and there was another vehicle,” she said.

“All I could see were two of my fellow beggars lying in a pool of blood. Their faces were burnt beyond recognition.”

Somalia’s interim government warned on Wednesday that it expected a surge in violence as the Muslim holy month of Ramadan draws to a close.

Al-Shabab in August declared a “massive, final” war against what it called “invaders”, an apparent reference to the 6,000 African Union troops deployed in the country to support government forces.

Fighters attacked army barracks in several districts of Mogadishu following the announcement and dozens were killed.

Hundreds of new peacekeepers, mostly Ugandan, have arrived in recent weeks to help the government in its battle against al-Shabab.

The force has so far been able to do little more than guard the airport and port and shield the president. 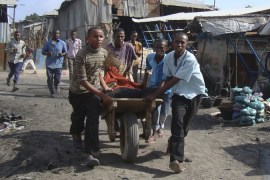 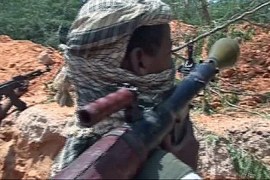 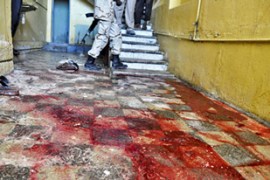