An online vocabulary game may be a new source of help for millions of people affected by the recent floods in Pakistan.

The internet brainteaser, Freerice.com, which draws an average of 40,000 players a day, challenges competitors to guess the correct meaning of a word from four options.

For every correct answer, it rewards them with rice that is donated to people who have been driven from their homes in Pakistan.

The game starts easy and gets harder, moving from “angry” to “arundinaceous” (meaning “of or like a reed”). Every correct answer grants the player 10 grains of rice donated through the United Nations World Food Program (WFP) and paid for by advertisers.

“It’s a stellar example of how a fun and simple idea can harness the power of the internet’s potential to contribute to the world’s most pressing global issue – hunger,” Nancy Roman, director of communications of WFP, said.

Launched in 2007, the online game has already raised enough rice to feed more than 4.2 million people for a day in countries including Uganda and Bangladesh, and is now trying to help victims of the torrential monsoon rains in Pakistan.

All the rice earned by participants on Freerice.com from September 7 onwards will go to help the flood victims.

Since the start of the crisis, WFP has delivered a one-month supply of food to more than 3 million people, including a million young children, who have been given special food to prevent them from slipping into malnutrition.

“Last week, we started enriching the basic emergency food rations used up to now, adding new items including rice,” Free Rice said on its website, adding that “because of the flood damage, many farmers in Pakistan cannot plant crops for the coming year, meaning that in addition to the current needs – around six million people currently need food – there is also a risk of severe hunger in the coming year.”

Freerice.com was voted into the Times list of 50 best websites in 2008.

“Other sites give away charitable donations for little more than a mouse click, but Free Rice makes you earn them,” Times wrote about the site.

The site’s latest campaign comes with the launch of a new version of Free Rice (2.0) that aims to integrate game play with social media such as Facebook and Twitter in an attempt to drive up the site’s popularity and attract new players. 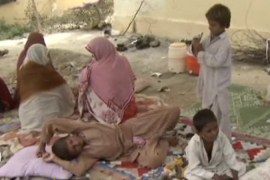 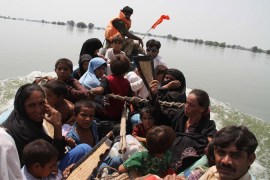 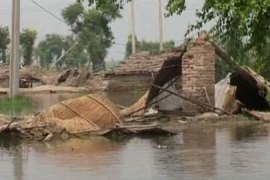 Officials are accused of constructing barriers to save their own lands.