At least 18 people have been killed and more than 56 injured in a car bomb attack targeting a police headquarters in Pakistan’s northwestern city of Kohat in Khyber-Pakhtunkhwa Province.

Tuesday’s attack came hours after the Taliban threatened more suicide attacks on a government and security forces already overwhelmed by the worst flooding in Pakistani history.

A number of houses collapsed from the force of the blast and rescuers sought to dig out their occupants.

“Most of the victims were women and children, and 10 houses were badly damaged,” Khalid Khan, a top administrative official in Kohat,  told AFP news agency.

Police official Dilawar Khan Bangash said the bomber drove a car laden with about 300 kg of explosives into the gates of the complex as people were breaking their dawn-to-dusk fast for the Muslim holy month of Ramadan, and the blast brought down several houses and damaged nearby buildings.

He said several people were in critical condition and the death toll could rise.

Shortly afterwards, a police patrol hit a roadside bomb in the nearby town of Hangu, and several policemen were wounded.

“While the nation is passing through difficult times due to devastating floods, these coward criminals have killed innocent Muslims when they were breaking their fast in their homes,” Gilani said in a statement.

Armed groups have killed nearly 120 people in suicide bombings since resuming a bloody campaign last week to topple the government after a one-month lull during the floods.

A Taliban spokesman on Tuesday threatened more suicide attacks on security forces and government offices in response to US drone aircraft strikes on its members in tribal areas.

“Americans are carrying out drone attacks with the permission of Pakistan and we will take revenge with suicide attacks on security forces, police and government offices,” Taliban spokesman Azim Tariq told Reuters news agency by telephone from an undisclosed location.

“Drone attacks have killed dozens of innocent women and children but America has never expressed its regret.”

Nineteen people, including policemen and children, were killed in a suicide bombing at a police station in the northwestern town of Lakki Marwat on Monday.

Kohat is a garrison town close to the tribal areas of Khyber and Orakzai, known as major refuge for armed groups linked to al Qaeda and Taliban. 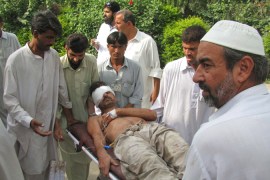 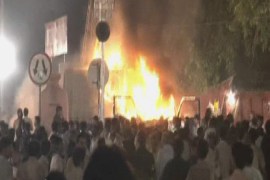