The workers, who make clothing for international brands like Marks & Spencer, JCPenney, Wal-Mart and H&M, demanded a minimum monthly salary of 5,000 taka ($72).

But on Thursdaythe government announced increased salaries of only $43 a month, for the millions of workers in the country’s key export industry.

This was an 80 per cent increase to the minimum monthly wage for garment workers – up from $24 – the lowest industry salary in the world.

Most unions spurned the offer, saying the workers need at least $72 a month to ensure a minimum standard of living in the face of surging food prices and property rents.

Mosherafa Mish, head of the Garment Workers Unity Forum, which has been at the forefront of efforts to win better wages and working conditions for employees, called the pay hike “insultingly low”.

“The government should not intimidate the workers. The protests are a normal and spontaneous reaction to the government’s sham wage hike,” she said.

“They are holding protests because that’s the only way their voices can be heard.”

Mish alleged police were seeking to intimidate union leaders with death threats, including against herself, and had raided some of their houses.

On Saturday, Sheikh Hasina Wajed, the country’s prime minister, told workers to “accept the pay hike and return to work”, threatening tough action against those who remain on the streets.

She said continuing unrest, that often disrupted production and damaged manufacturing plants, would not benefit workers, but instead could threaten their livelihoods.

Hasina asked workers to return to work peacefully while factory owners said they would reopen closed plants if order was restored.

The Bangladesh Garment Manufacturers and Exporters Association, representing more than 4,500 garment factories, said they would be compelled to close down factories permanently if the situation did not improve.

The garment industry is Bangladesh’s biggest export market, accounting for more than 80 per cent of the impoverished country’s annual export earnings of $16bn.

But workers earn wages well below the poverty line.

Sahara Kahtoon, the country’s home minister, accused unnamed conspirators of trying to “destroy the vital employment and export sector as part of a bigger plan to destabilise the country and detract democracy”.

“We will find out the conspirators and give them exemplary punishment,” Sahara said.

“I urge all Bangladeshis to remain vigilant against conspiracies by vested quarters.” 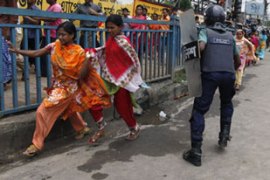 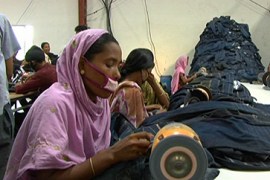 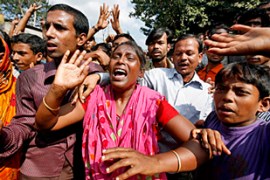 At least two killed as textile workers take to the streets to demand salaries. 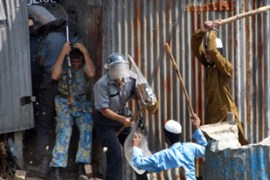