Anwar Sadat changed the geopolitical landscape of the Middle East by signing a treaty with Israel in 1979, making Egypt the first Arab country to fully recognise the Jewish state.

Sadat caused controversy in 1977 when he made a historic visit to Israel – unprecedented by an Arab leader – and addressed the Knesset, where he said: “Any life lost in war is the life of a human being, irrespective of whether it is an Arab or an Israeli.”

In recognition of Sadat’s efforts at negotiating peace with Israel, he was awarded the Nobel Peace Prize in 1978 along with Menachem Begin, the Israeli prime minister.

“Through me it was the eternal Egypt that was expressing itself: Let us put an end to wars, let us reshape life on the solid basis of equity and truth,” Sadat said in his Nobel acceptance speech.

However, opposition to peace with Israel, allegations of corruption, a round-up of 1,500 Egyptian Islamic Jihad members, the suppression of free speech and an economic downturn all helped fuel domestic anger at Sadat.

In 1981, Sadat was assassinated by members of Egyptian Islamic Jihad, an Islamist group opposed to peace with Israel, as he watched a military parade commemorating the 1973 war.

Sadat was born in Egypt in 1918 to a poor family and had 13 siblings. He graduated from the Cairo Military Academy in 1938 and joined the Egyptian army.

There, Sadat and Nasser along with other junior officers formed a revolutionary group called the Free Officers Movement dedicated to freeing Egypt from British control.

During the Second World War, he plotted with Germany to expel British forces but was arrested in 1942. He escaped two years later only to be caught again in 1946 and implicated in the death of a pro-British minister. He was acquitted in 1948.

After a brief attempt at a normal life after leaving prison, he rejoined the Free Officers Movement, which had grown considerably in his absence. Sadat participated in the 1952 coup that overthrew the monarchy of King Farouk I.

Nasser, became president of the new government of Egypt, and Sadat served in various governmental roles.

During the 1967 Six Day War, Sadat pressed for Soviet assistance but was largely ignored. Egypt would suffer a humiliating defeat losing much of its air force and offensive capabilities, and the entire Sinai Peninsula.

Nasser died in 1970 and was succeeded by Sadat, who was his vice president at the time.

After becoming president in 1970, Sadat expelled the Soviets from Egypt

In October 1973, the Egyptian and Syrian armies launched a surprise attack during the Jewish holiday of Yom Kippur. Israelis were surprised at how quickly the Egyptian army made military gains in the Sinai. However, the tide of war turned against the Arabs when the US provided military hardware to the battered Israelis.

Following the war, Egypt struggled with a weakening economy and increasing domestic strife; Sadat was convinced that peace with Israel would reap rewards for to Egypt.

Sadat travelled in 1978 to Camp David, Maryland and began intensive negotiations -mediated by Jimmy Carter, the US president – with Begin and his entourage.

Angered by Begin’s refusal to remove Jewish settlements from the Sinai, threatened to withdraw from the negotiations.

“You promised me that you would stay at Camp David as long as I was willing to negotiate … I consider this a serious blow to our personal friendship and to the relationship between Egypt and the United States,” Carter had said to Sadat, urging him to stay.

The Camp David Accords, which emerged from the negotiations, followed the land-for-peace formula: Israel would return the Sinai to Egypt who would fully recognise the Jewish state and establish full diplomatic relations.

Egypt would also allow free passage for Israeli ships through the Suez Canal.

The treaty ended the state of war that had existed between them since 1948. 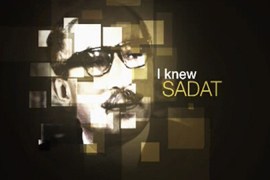 Al Jazeera looks at the life of the late Egyptian president Anwar al-Sadat. 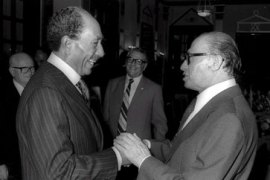