Finland’s parliament has been considering whether to pass tough gun laws after a deadly school shooting two years ago brought pressure on the government to impose better regulation.

But in a country with a long history of gun ownership, the proposals are being hotly contested.

Guns are considered to be part of Finnish culture and for years the Finns have been protective of their gun laws.

In a country which has proportionately the third highest gun ownership in the world (after the US and Somalia) there has been resistance to outside interference, including a rejection of calls to raise the minimum age for gun ownership from 15.

But one event in 2007 became a tipping point. Just before midday on November 7, Pekka-Eric Auvinen, an 18-year-old student, walked into his former school in the Tuusula municipality armed with a legally-owned semi-automatic pistol and began firing.

Before he was done, eight students and teachers lay dead. He then turned the gun on himself and died later that night in hospital.

Finland knew then it had do something about gun ownership.

When Pirjo Olli heard the news about the Jokela high school massacre, a shiver ran through her body, and she could not not help the tears flowing.

Fifteen years ago, her husband Matti was shot dead by an off-duty soldier in a case which is well known in Finland.

“It always brings me back to what happened to me … I also think about how many people are touched by these sort of things.”

Struggling for breath, trying to regain her composure she adds: “The amount of people who have to suffer – it’s just so enormous. I know I felt I had lost everything”.

Within hours of the Jokela shooting, an online petition was launched demanding that handguns be banned except where needed on the job.

The petition ran for a month and received exactly 57,299 signatures, around one per cent of Finland’s population.

The man behind the website was Jan Bede, a talented pentathlete who knows what guns could do.

“Who actually needs a small gun and why should some people be allowed to carry this type of weapon? These are used for killing people,” he says.

“I thought others would share my view that really the only people who need these guns would be the police, security and the army. No one else needs them”.

The Finnish government has taken note; over the next two weeks, Finland’s parliament will finally debate changes to the law.

Some of the measures that have been suggested include raising the minimum age for gun ownership from 15 and putting more checks in place – such as an assessment of mental health – before a gun license is issued.

The Finnish authorities know that they are walking a fine line, a fact acknowledged by Antti Pelttari, the junior interior minister.

“Of course there is public pressure to prohibit hand guns. But remember hunting is such a popular hobby in Finland,” he says.

“The government has decided to put some more restrictions but you need room because shooting and hunting are legitimate hobbies and we don’t intend to limit those,” Pelttari adds.

There are 670,000 gun license holders in Finland and many of them are suspicious of the new law. They argue that it would give police the right to inspect private homes without suspicion of a crime, a move they say would be unconstitutional.

Peltarri says gun ownership restriction would not be an infringement of privacy, but police would make an appointment with gun owners to check they were being stored safely.

On September 1, Helsinki’s only shooting range re-opened after its summer break.

Three clubs operate in its rooms deep underground on the outskirts of the capital.

The people here have followed the debate and sympathise with the victims of Jokela, and of another school shooting last year in Kauhajoki, where 11 people died, including the shooter who killed himself.

Pekka Lindfors, who has enjoyed the sport for nearly 40 years, believes good people are getting caught up in a bad law.

He offers me the chance to fire off one of his pistols. I politely refuse.

“Those who really practise target shooting, well I have not heard of any of those people using the guns to kill humans,” he says.

“Those behind the school shooting, they are not normal shooters, they are not target shooters. The medical checks on these people should have been much stricter.”

The new restrictions are almost certain to become law by the end of the year.

Although they may not be enough to prevent another tragedy, they will make it harder for someone to try. 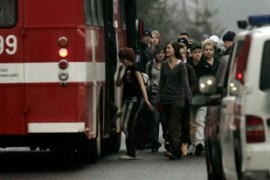 Student kills pupils and schoolhead after posting a warning on the internet.