A warrant for Vahidi’s arrest was issued by Interpol, the international police organisation, in November 2007.

Tehran has always denied any connection with the bombing.

Ahead of the vote, Ahmadinejad, whose re-election in a disputed poll in June prompted street protests, appealed to parliament to approve his team, saying it would deliver a “punch” to Iran’s enemies.

Legislators rejected the nominations of Sousan Keshvaraz and Fatemeh Ajorlou as education and welfare ministers respectively.

Mirkazemi received the lowest number of votes of the approved ministers, just 147.

Iran is the world’s fifth-largest oil exporter and crude sales account for most state revenue.

Like several other nominees, Mirkazemi, who was commerce minister in Ahmadinejad’s outgoing government, had been criticised for alleged lack of experience.

He faces the challenge of boosting oil and gas output under US and UN sanctions, imposed because of a dispute over Iran’s nuclear programme.

Alireza Ronaghi, Al Jazeera’s Tehran correspondent, said that the result was largely a success for Ahmadinejad.

“President Ahmadinejad introduced 21 ministers – three of them have been rejected, none of them in sensitive positions,” he said.

“The two women who have been rejected out of the three ministers that Ahmadinejad nominated, parliament is going to be blamed for that in the future … Ahmadinejad had a much harder time four years ago.”

In 2005, when Ahmadinejad entered his first term as president, parliament rejected four of his first choice nominees.

Ahmadinejad has three months to propose new candidates to replace those voted down by the 290-seat parliament. 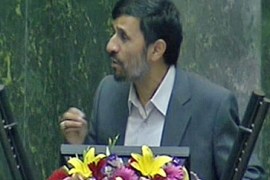 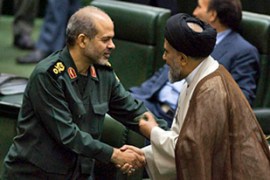 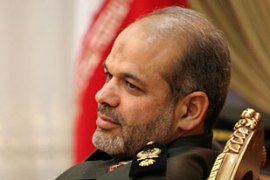 President’s controversial pick for defence portfolio gets backing from legislators.