“Former president Chen expects the worst. He thinks the whole process is flawed and biased. It will be a political verdict, a revenge,” Cheng Wen-lung, his former lawyer, said.

Cheng visited the former president on Wednesday in a detention centre outside the capital Taipei where he has been held since late December.

The case has also implicated members of Chen’s family, including his wife, Wu Shu-chen, who was sentenced last week to a year in jail for instigating perjury.

Wu, along with the couple’s two adult children – both recently sentenced to six months in jail on related perjury charges – are also expected in court for verdicts on other counts.

Some legal experts have expressed concern about the handling of the case, including the court’s decision to detain Chen before his trial and to switch the presiding judge.

In a letter to the Taiwan government earlier this year, nearly 30 international scholars warned that “the erosion of the judicial system” could jeopardise Chen’s right to a fair trial.

“Taiwan’s judicial system must be not only above suspicion but even above the appearance of suspicion, of partiality and political bias,” the letter said.

Lingering below the surface is an ongoing debate in Taiwan about the island’s future, and whether it should establish closer ties with China or chart its own course.

Taiwan has been governed separately from China since 1949, and Chen spent his presidency pushing for formal independence, angering China, which sees the country as part of its territory.

Chen continues to maintain his innocence and accused his successor, Ma Ying-jeou, of leading a politically motivated “witch hunt” against him, a charge Ma has denies.

Ma, who has built closer ties with Beijing since becoming president, said in July that “many people told me to speed up [Chen’s case] but I can’t get involved … if I took the lead, the country would be very chaotic now”.

Chen, who says he is being punished for advocating Taiwan independence, has gone on hunger strike three times and dismissed his lawyers to protest against his detention and trial.

“I am a victim of political struggles,” he told the Apple Daily newspaper in an interview published on Thursday.

“I expect to get the heaviest sentence, which is life imprisonment.” 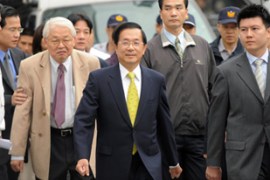 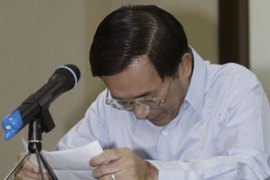 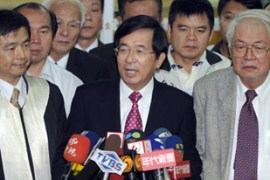