Turkey was one of the first countries to recognise Armenia’s independence in 1991, but the two countries never established diplomatic relations and their joint border has been closed since 1993.

The statement released by the Armenian and Turkish foreign ministries on Monday said that the two countries would start consultations to sign two protocols – one to establish diplomatic ties, the other to develop relations.

The talks, with continued mediation by Switzerland, are to last six weeks.

The dispute between the two countries stems from the mass killing of Armenians by Ottoman Turks during the first world war.

Some historians have estimated that 1.5 million Armenians were killed by Ottoman Turks at the end of the Ottoman empire.

Ankara rejects claims the killings amounted to genocide, saying both Turks and Armenians were killed in high numbers.

Anita McNaught, Al Jazeera’s correspondent in Turkey, said that Ankara was motivated by a desire to play a key diplomatic role in the region.

“Turkey, as you know, wants to be a peacemaker in the region and I think its occurred very clearly to its government – as well as its citizens – that you can’t make peace abroad unless you make peace at home,” she said.

“If Turkey wants to convince the region to become peaceful, mutually constructive and stable, then it has to play its own role in that by resolving some of its outstanding intractable disputes with its neighbours and, of course, with its own internal ethnic groups.”

But the negotiations still face pitfalls, and will follow months of inactivity after signs of promise earlier in the year when Barack Obama, the US president, appealed for reconciliation during a visit to Turkey.

Despite an agreement that the process should proceed without preconditions, Recep Tayyip Erdogan, the Turkish prime minister, has linked it to a resolution of the dispute over Nagorno-Karabakh, an Azeri region that was occupied by Armenian troops.

The Turkish population shares close cultural and linguistic relations with Azerbaijan, which is pressing Turkey for help in recovering its land.

Azerbaijan has said it expects Turkey to keep its border with Armenia closed until the conflict over Nagorno-Karabakh has been resolved.

Serzh Sarkisian, the Armenian president, is due to make a return trip for a match in October, though he has said he wants significant progress on the border issue first.

But he has indicated that the dispute over the first world war mass-killings would not be a deal-breaker.

“But we do not regard a recognition of genocide as a preliminary condition for establishing relations.”

The restoring of ties is expected to give Armenia access to Turkish and European markets. 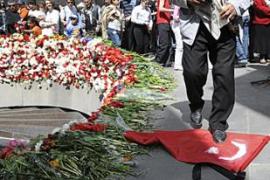 Armenia and Turkey to restore ties

Neighbours set to sign deals to open border and end century of hostility.