Voters in the two towns of Jaffna and Vavuniya were to choose between a broad government coalition, the main opposition party and a group supportive of the Liberation Tigers of Tamil Eelam.

“This is another step toward strengthening democracy in the north,” said Douglas Devananda, a government minister from Jaffna and an ethnic Tamil.

Suresh Premachandran, a member of the Tamil National Alliance – seen as a front for the rebels – said the elections were just a government show.

“The Tamil people do not want an election at this time when hundreds of thousands of their relatives are held in government camps,” he said.

Around 250,000 Tamils displaced by the war are still being held in camps guarded by the military, despite the government’s promise to resettle 80 per cent of them by the end of the year.

David Chater, Al Jazeera’s correspondent reporting from Valaichenai, in the eastern Batticoloa region – one of the areas where the displaced Tamils are being held – says many are sceptical about the elections.

“The voting is not important to most people in these Tamil areas in the east of Sri Lanka, they don’t even care about what’s happening in the North … all that those released from IDP camps want is peace,” our correspondent said.

“Some refugees that have come from the IDP camps have told me that they had no idea the elections were going on anywhere near them … as for what they feel about their future – they are happy to be alive,” he said.

Though the campaign was relatively peaceful, few people seemed engaged, said Keerthi Tennakoon, the national organiser of the Campaign for Free and Fair Elections.

A poll taken late last month by the Centre for Policy Alternatives, a public policy group, showed that 67 per cent of eligible voters in Jaffna were either undecided or refused to say for whom they would vote.

“They are not showing any enthusiasm for the elections,” Tennakoon said.

Paris-based Reporters Without Borders said the decision to bar the media “dashes any hope of a transparent election”.

The elections in the north are the first in the towns since 1998, and are aimed at entrenching civilian administrations there after years of violence caused by the war with the LTTE.

Neil DeVotta, a professor of political science at Wake Forest University in the United States, told Al Jazeera the elections “bode well for democracy” in the wake of the Tamil Tiger defeat.

“People are finally able to elect their leaders to the local councils … but the intimidating tactics that have accompanied the campaigning means it has not been very free and fair thus far,” he said. 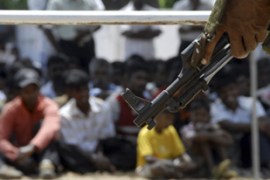 Separatist leader interrogated after being detained “under murky circumstances”. 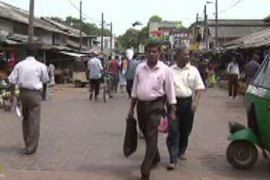 Video: Polls no help to refugees