Yemen, one of the world’s poorest countries and a crucial US ally in Washington’s fight against al-Qaeda, is in the midst of a series of conflicts that threaten its stability.

As well as tackling al-Qaeda fighters and sealing with growing secessionist feeling from south Yemen, the government has for five-years waged a campaign against a group of Shia Muslim fighters in the country’s north.

The conflict with the Houthi fighters, which has cost the lives of thousands of people, is a mix of local and tribal concerns stemming from historical roots.

Although the current campaign is part of a fight that has been under way since 2004, its roots go back even further.

In 1962, a revolution in Yemen ended over 1,000 years of rule by Zaydi Hashemites, who claimed descendance from the Prophet Mohammed.

Zaydism is a branch of Shia Islam, though its practices often appear closer to Sunni Islam than traditional Shia belief.

Saada, in the north, was their main stonghold and since their fall from power the region was largely ignored economically and remains underdeveloped.

During Yemen’s 1994 civil war, the Wahhabis, an Islamic group adhering to a strict version of Sunni Islam found in neighbouring Saudi Arabia, helped the government in its fight against the secessionist south.

Zaydis complain the government has subsequently allowed the Wahabis too strong a voice in Yemen.

Saudi Arabia, for its part, worries that strife instigated by the Shia sect so close to Yemen’s border with Saudi Arabia could stir up groups in Saudi itself.

Although it has received little international coverage, the conflict essentially pits Yemen’s Sunni-majority government against Shia fighters, a conflict that has added significance for many Arab countries worried about the rising influence of Shia-ruled Iran.

The last five years of fighting against the armed Houthi group were sparked in 2004 by the government’s attempt to arrest Hussein al-Houthi, a Zaydi religious leader and a former parliamentarian on whose head the government had placed a $55,000 bounty.

The Yemeni government has little authority in the mountainous areas outside the major cities, but amid a sustained campaign, al-Houthi was killed in an attack on his hideout.

The movement is now led by al-Houthi’s brothers, including Abdul-Malik al-Houthi.

Fighting eased over the years and in 2007 a deal was signed between the government and the fighters, but never implemented.

A year later, in 2008, Qatari mediators helped revive the deal and the two sides met in Doha to sign a document outlining procedures for the implementation of the earlier agreement.

But on August 10, 2009, Ali Abdullah al-Saleh, the Yemeni president, said the fighters showed no intention of adhering to the peace process and accused them of destroying homes and farms and blocking food distribution.

The campaign began again and Yemen’s Supreme Security Committee announced it would crush the fighters with an “iron fist”. 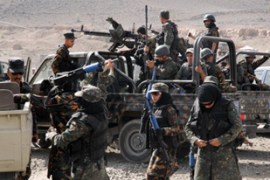