At 6:55am on February 22, 2006, two explosions tore through the revered al-Askari Shrine in Samarra, north of Baghdad, changing the course of the conflict in Iraq.

The force of the blasts caused the dome to collapse and scattered its 72,000 pieces of gold as debris.

In late 2007, the Iraqi government contracted a Turkish company to rebuild the shrine but later terminated the contract saying they had breached the terms and that the company would take longer than expected to complete the project.

On April 9, 2008 Iraqi contractors started working to remove the rubble. By summer 2009, they had rebuilt the dome and the minarets, which are scheduled to be coated with gold by the end of Ramadan in September.

Reconstruction work was expected to take a maximum of two years.

A government committee is in charge of work involving various ministries. The reconstruction project is being publicised by the government and Samarra residents as an example of post-war unity – both Shia and Sunnis are working to restore the shrine.

Though one of the holiest Shia sites in the world, the al-Askari Shrine is situated in a predominantly Sunni town; Shia pilgrims regularly paid homage at the shrine without incident for more than 1,100 years.

Sunni armed groups allied with al-Qaeda were immediately blamed for the blasts. Hours later, Shia militias unleashed a campaign of revenge against Sunnis in an already war-ravaged Iraq.

The war moved to the streets of the capital Baghdad, leading George Bush, the US president, to admit failure and change US tactics in Iraq.

Management and protection of the al-Askari Shrine falls under the Sunni Endowment, a government body that caters to the needs of Sunni mosques and religious establishment throughout the country.

Both are descendants of the Prophet Muhammad, and the Shia consider them to be among his successors.

Samarra is also the site of the disappearance of Muhammad al-Mahdi, the 12th and last imam, also known as the “hidden Imam”.

Muhammad al-Mahdi is the son and grandson of the two imams buried in the al-Askari Shrine. The Shia believe that he will return to earth to restore justice to humanity. 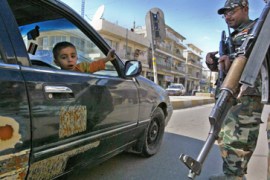 Fighters in Sunni armed groups say they have not received wages from the government.