Tal Afar, in Nineveh province close to the Syrian border, was the scene of one of the deadliest attacks in Iraq since the US-led invasion, killing at least 152 people in 2007.

Nineveh province is said to be a stronghold of al-Qaeda and other armed groups opposed to the US presence. It is also the scene of growing tensions between the regions Arab, Kurd and Turkmen communities.

“The biggest problem is that there are people who are not comfortable with this reconciliation … terrorists do not welcome this,” he said.

“The security situation is still fragile and all what was said that there was serious improvement of security in Iraq was not correct and not accurate.

“The second thing is that the election is coming. Those who were gathering before to form sectarian movements here and there, they are trying to do that again.

“To do that, they want an atmosphere for sectarian election. And this can only be done when there is an introduction for that. This violence, I think, is an introduction to bring back sectarianism to the minds of people so that they can pull them to the election in a sectarian way.

“Unless there is a pressure from the world community, this government is not capable and not interested to achieve reconciliation in the country.”

US combat troops pulled out of the centres of all cities and major towns across Iraq on June 30 as part of a plan to withdraw US forces by 2012.

The withdrawal, mostly to bases at the edges of cities, shifts the burden for keeping Iraqi streets safe mainly on Iraqi police and soldiers, whose ranks have been rebuilt after they were disbanded following the invasion in 2003.

Atheel al-Nujaifi, the governor of Nineveh province, said: “There are many parties trying to incite chaos following the withdrawal of US troops.

“It is not in their interest to see stability and security.”

The four weeks leading up to the US withdrawal witnessed the highest death toll in 11 months, according to official figures.

A total of 437 people, including 372 civilians, were killed in June, according to the figures compiled by government ministries. 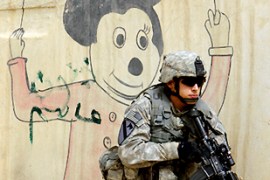 Two car bombs, detonated within minutes of each other near Mosul, kill at least 12 people. 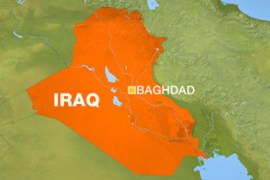 Kirkuk bombed amid US pullout