“We resolved to reset US-Russian relations so that we can co-operate more effectively in areas of common interest.

“Today, after less than six months of co-operation, we have done exactly that by taking concrete steps forward on a range of issues.”

The nuclear framework deal commits the two countries to cut the number of nuclear warheads they each hold after the Strategic Arms Reduction Treaty (Start-I) expires in December.

“Within seven years after this treaty comes into force, and in future, the limits for warheads linked to … [strategic delivery systems should be] within the range of 1,500-1,675 units,” the framework agreement read.

Medvedev said: “There have been a number of problems in recent years – in fact, many problems.”

But he said the arms deal was “not only vital for the future of our countries, but will also affect the outlook for world developments in many ways”.

“Without any doubt, this is the kind of meeting expected and hoped for on our side and on [the US] side,” he said.

Thomas Pickering, a former US ambassador to Russia, said he believed that the preliminary deal was of greater importance in terms of diplomacy than strategy.

“It involves obviously some small but very significant reductions and a realignment of the inspection systems of Start I,” he told Al Jazeera.

“But it marks a period of [what] could be potentially a new chapter – the chapter that is based on finding areas of common interest to focus on, rather than areas of common difference, which had been the watchword for the last decade or so.

“Even more importantly, there is [also] the issue of missile defence, in which the two have also announced that they will continue to work together to examine further opportunities for possible co-operation – which is quite a change.”

Moscow had repeatedly criticised US plans to install anti-ballistic missile launchers and radar systems in eastern Europe, saying that the programme was aimed at limiting Russia’s military capabilities.

But Washington has denied that the project is geared towards Russia, saying that the missile ‘shield’ is intended to counter the threat of missile attacks from countries such as Iran.

Alexander Nekrassov, a former advisor to the Kremlin, told Al Jazeera that Monday’s meeting was significant because it marked the start of a “conciliatory tone” from the US towards Russia.

“We are usually used to the American president being tough and the Russians explaining themselves. This is a different approach completely,” Nekrassov said.

“Now there are two questions, whether President Obama is conciliatory from the point of view of strength or weakness.

“Obama is playing the right cards. But the problem is how the Kremlin interprets that. They might start thinking that Obama is weak.”

The two presidents also agreed to work towards monitoring the security of vulnerable nuclear material within four years, Obama said.

He said Moscow was also open to discussing how best to address the Iran and North Korea’s nuclear programmes, saying: “North Korea has abandoned its own commitments and violated international law.

“That is why I am pleased that Russia joined us in passing a UN Security Council Resolution that calls for strong steps to block North Korea’s nuclear and ballistic missile programmes.”

“Iran also poses a serious challenge through its failure to live up to international obligations.

“This is not just a problem for the United States; it raises the prospect of a nuclear arms race in the Middle East – which would endanger global security – while Iran’s ballistic missile programme could also pose a threat to the broader region.”

Obama and Medvedev also announced that Russia had authorised the use of its airspace for the transit of US troops and arms to Afghanistan.

The deal will open up a crucial corridor for the US as it steps up its fight against the Taliban in line with Obama’s new Afghanistan strategy. 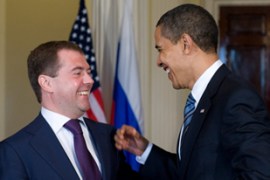 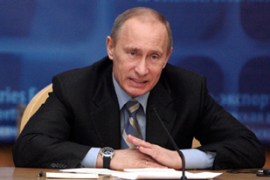