Boko Haram opposes western-style education and has said it wants to lead an armed insurrection and rid society of “immorality” and “infidelity”.

About 140 people have been killed in three days of violence in Nigeria’s Muslim-dominated north.

He said that the military operation currently under way would “contain them once and for all”.

“They will be dealt with squarely and forthwith,” he said.

“There has been a serious intensification of the assault on members of this group, Boko Haram, which is behind this wave of killings,” Yvonne Ndege, Al Jazeera’s correspondent reporting from Abuja, Nigeria’s capital, said.

“The president of Nigeria has said that anybody perpetrating violence will be dealt with very, very severely – in fact, that means imminent death,” she said.

“If you’re caught working among Boko Haram fighters, there is absolutely no question, your life will not be spared.”

But Nii Akuetteh, the founder of the Democracy and Conflict Research Institute, an African think-tank, told Al Jazeera that, while religious clashes had occurred in the past in Nigeria, the recent clashes appeared to have little political motivation.

The clashes began on Sunday in nearby Bauchi state, with fighters attacking police stations, before spilling over into Yobe. Officials said that 55 people were killed in both states. 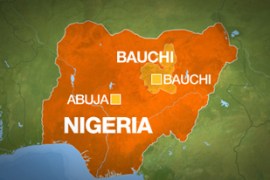