In late June, at least three people were killed and more than 60 injured in a collision between two passenger trains in central China.

The crash occurred in the city of Chenzhou in Hunan province.

It generally has a good safety record, although last year, at least 72 people were killed and hundreds were injured when a high-speed train jumped its tracks and slammed into another in eastern Shandong province.

The accident was the worst train crash in China since 1997, when 126 were killed in Hunan, Xinhua said. 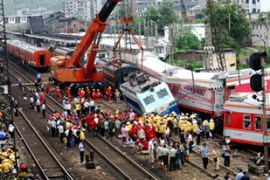