His comments came after Nigerian authorities imposed a curfew and deployed troops to the country’s north to quell the violence.

But late on Tuesday, government troops and armoured vehicles surrounding the suspected hideout of Mohammed Yusuf, said to be the leader of the group known as Boko Haram, continued to exchange fire with fighters in Maiduguri, the capital of northern Borno state.

A source at the police headquarters told the AFP news agency that the troops had shelled Mohammed Yusuf’s home and a mosque run and guarded by hundreds of followers.

Yar’Adua said security forces were still working in Borno to bring the situation under control and vowed to “flush out” the fighters.

The president also said security forces would continue “security surveillance all over the northern states to fish out any remnants of these elements and deal with them”.

The group has targeted police in four northern states since early Sunday after police arrested several leaders of the group.

The violence spread on Monday to the states of Borno, Kano and Yobe, where fighters set fire to churches, a police station and a prison.

The unrest is the deadliest sectarian violence in Nigeria since last November when human rights groups say up to 700 people were killed in the central city of Jos in clashes between Muslims and Christians.

Nigeria’s 140 million people are nearly evenly divided between Christians, who predominate in the south, and primarily northern-based Muslims.

More than 10,000 Nigerians have died in sectarian violence since then. 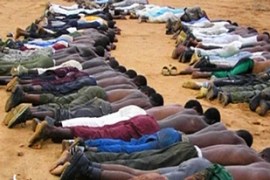