He said that further evidence would have to be produced to prove Kasab’s involvement in areas he has not mentioned.

Before the adjournment, Kasab told the court that he had orders to take hostages at the city’s main railway station where he and an accomplice opened fire and threw grenades, killing 52 people and injuring more than 100 others.

“The target was to fire at CST [Chhatrapati Shivaji Terminus] and take hostages on the upper floor,” he said.

“We were also directed to fire at any persons who might come.”

The judge then banned press reporting of a separate statement by Kasab in which he appeared to suggest a reason for the attacks, saying the order was “in the interests of communal harmony”.

The rail station attack was the bloodiest episode of the 60-hour reign of terror against multiple targets in south Mumbai.

The Mumbai attack severely strained relations between India and Pakistan, putting the brakes on a peace process between the nuclear-armed rivals.

India claims that armed groups in neighbouring Pakistan were behind the well-planned attack and that Islamabad is not doing enough to clamp down on them.

Islamabad had denied any state involvement in the attack.

But on Monday he stood up in the special prison court and admitted his involvement, before detailing how the attacks happened and the group’s journey from Pakistan.

It was not immediately clear what prompted him to change his plea.

If found guilty, Kasab could face the death penalty. 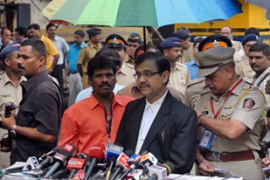