Prosecutors had accused the pair of taking part in “one of the most notorious campaigns of ethnic cleansing” as members of a paramilitary group in Visegrad.

Patrick Robinson, the presiding judge in the case, said the atrocities exemplified “the worst acts of inhumanity that one person may inflict on others”.

“At the close of the 20th century, a century marked by war and bloodshed on a colossal scale, these horrific events stand out for the viciousness of the incendiary attack, for the obvious premeditation and calculation that defined it, for the sheer
callousness and brutality,” the judge said.

Milan Lukic, who Robinson said was the ringleader, shook his head in reaction to the verdict.

The court furthermore found Milan Lukic guilty of having been among a group who led seven Bosnian Muslim men to a river in June 1992, lined them up along its bank and opened fire with automatic weapons, killing five.

A few days later, he was among another group who killed seven Muslim factory workers next to the same river in a similar manner.

He was also convicted of killing a woman who he shot at point blank range.

“He was laughing, then he turned her body over with his foot and shot her in the back,” said Robinson.

Both men were convicted of having beaten Bosnian Muslim detainees “with extraordinary brutality”.

A spokeswoman for ICTY prosecutor Serge Brammertz said he was “satisfied” with the decision.

“It reflects the gravity of crimes committed and the responsibility of the accused,” Olga Kavran said.

After seven years on the run, Milan Lukic was arrested in Argentina in August 2005.

His cousin Sredoje surrendered to the Bosnian Serb authorities the following month.

The cousins’ defence lawyers had argued the pair should be acquitted for lack of evidence, citing inconsistencies in survivor accounts. 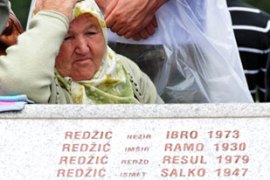 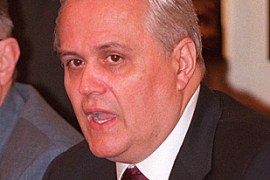