“However, I strongly believe that the document is an original one and all information included in it is correct. And, since 2004 until today, the actions of some members of the Palestinian Authority have definitely proven to me that these issues are correct.”

Arafat died in a Paris hospital in November 2004 after falling into a coma.

Hussein al-Shaikh, the secretary of Fatah in the West Bank, criticised Kaddoumi, who was one of the group’s founders, and called for a meeting of the central committee to discuss the allegations.

Al-Shaikh said: “For what reasons and purposes and for the interest of which party Abu Lutif [Kaddoumi] raises such an issue now?.”

Kaddoumi, who lives in Tunisia, said he had waited five years to air the allegations as he had been gathering more evidence.

“I believe today is the right time to offer them with the document to discuss it in the upcoming Fatah conference,” he told Al Jazeera.

“I hoped that the conference will be held oversees, so we can discuss the document, but, unfortunately, when the location was changed and Abu Mazen [Abbas] took a unilateral decision to hold the conference under the Israeli occupation, I decided to publish the information.”

Fatah is scheduled to hold its first party congress in 20 years in the West Bank in August 4, but Kaddoumi will be unable to attend because of its location.

Kaddoumi is a long-time rival of Abbas and does not recognise any of the interim peace deals agreed between Israel and the Palestinian Authority.

The Palestinian Authority (PA) has suspended Al Jazeera’s news operation in the West Bank and threatened to take it to court over its reporting of Kaddoumi’s allegations.

The information ministry accused the network of “devoting significant segments of its broadcasts to incitement against the Palestine Liberation Organisation (PLO) and the Palestinian Authority (PA)”.

The accusations were rejected by Al Jazeera.

In a statement, Al Jazeera said it was “stunned” that it had been sanctioned for the story, which had also been aired by several other media.

“Al Jazeera is astonished to learn of the Palestinian Authority’s decision to suspend the network’s operations in the West Bank and the PA’s intention to take legal action against Al Jazeera’s Arabic channel.

“Al Jazeera believes that it has maintained strict professional journalistic standards and acted in accordance with its Code of Ethics in its coverage, and that the Palestinian Authority’s reaction reflects a repression of the freedom of media and a refusal to tolerate the opinions of others.

“Al Jazeera is surprised that it has been targeted by this decision while many other Arab and international media organisations also broadcast Kaddoumi’s allegations. 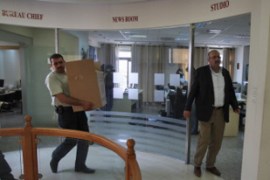 Al Jazeera describes the move as a repression of the freedom of media.