France has also asked Washington to use its spy satellites and listening posts to help with the search.

Officials said the search was centred on an area more than 1,100km off the Brazilian coast and while search aircraft have managed to fly over the area, the first navy ships are not expected to arrive until Wednesday.

Flight AF447, flying from Rio de Janeiro in Brazil to Paris, France, had encountered a severe thunderstorm before sending an automated message saying that its electrical system had failed at 02:14 GMT on Monday.

“It is probable that it was shortly after these messages that the impact in the Atlantic came,” he told reporters at Charles de Gaulle airport in Paris where the flight had been due to land.

Airline officials had earlier said the plane was probably hit by lightning, but Gourgeon declined to make a direct link between weather conditions and the error messages.

Al Jazeera’s Estelle Youssouffa, reporting from Paris, said the authorities at Charles de Gaulle had said that there was “no hope” for the airliner.

Nicolas Sarkozy, the French president, told relatives waiting for their loved ones at the airport that “the prospects of finding any survivors are very slim”.

“It’s a catastrophe the likes of which Air France has never seen,” he added.

If confirmed that all 228 people on board are dead, it would be the worst loss of life in Air France’s history and civil aviation’s worst accident for more than a decade.

Air France said the 216 passengers from 32 countries comprised 126 men, 82 women, seven children and a baby. There were also 12 French crew members on board.

Jean-Louis Borloo, the French minister in charge of transport, said hijacking had been ruled out.

He said there were “powerful” tropical storms in the area where the airliner disappeared from radar screens.

Barry Gromett, a meteorologist at the London Weather Centre, said that the aircraft was passing through an area known as the Intertropical Convergence Zone.

“It is a zone in the tropics where you can have particularly deep thunder clouds,” he said.

Jim Morris, an aviation expert and former pilot for the British air force, told Al Jazeera that while modern aircraft were “designed to withstand a lightning strike”, an electrical storm could still cause damage.

“It can cause structural damage such as burning through and blowing out rivets and it can potentially cause electro-magnetic interference with the flight control systems,” he said.

Air France said the plane, which went into service in April 2005, last underwent maintenance in a hangar in April.

The pilots were also very experienced, the airline said.

Airbus says the A330 has a good safety record, with no fatalities ever on a commercial flight. One did crash in 1994 during a test flight in southern France, however, killing all seven people on board. 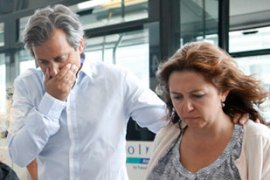 Jet with 228 people en route from Brazil to France believed to have crashed into Atlantic.