1918: Georgia declares independence after more than 100 years of Russian rule.

1989: About 20 Georgian pro-independence activists killed by Soviet troops in Tbilisi. Georgians and Ossetians clash over demands for greater autonomy for South Ossetia.

1993: Georgian troops driven out of Abkhazia after fierce fighting.

2001: Georgia and Abkhazia sign an agreement against the use of force in their dispute, but series of skirmishes later in the year.

2005: South Ossetia rejects a Georgian offer of autonomy within Georgia.

January: Saakashvili accepts gas from Iran after blaming Moscow for an explosion that damages a main pipeline delivering Russian gas to Georgia.

November: South Ossetia holds referendum intended to reaffirm independence from Georgia. The West calls the vote illegal, but Russia says it should be respected.

July: Heightened tension between Georgia and Russia, with several explosions in Abkhazia. US warns Russia against stoking tensions in breakaway regions.

October 3: At least six people are killed in a car bomb at the Russian army’s headquarters in Tskhinvali.

October 8: Russian troops complete a pullout from buffer zones next to Georgian regions that it had established during the war.

November 18: Thousands of opponents of Saakashvili rally in Tbilisi to demand early elections.

April 9: Tens of thousands of opposition supporters launch protests in Tbilisi calling for the president to step down.

April 14: Saakashvili accuses Russia of financing the rallies calling for his resignation.

April 16: Russia demands Nato call off military exercises to be held in Georgia in May, saying they will “complicate” tensions in the region.

May 5: Soldiers from a tank battalion in the Gori region stage a one-day mutiny. Georgia’s interior ministry says Russia behind the rebellion aimed at disrupting Nato exercises. Moscow’s envoy to Nato denies any involvement. 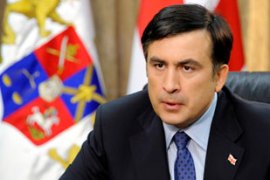 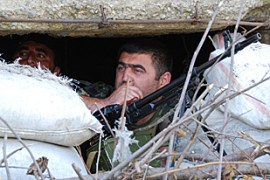 Many wounded in S Ossetia fighting