Prosecutors had been looking into charges that Koo paid the bribes in exchange for Chen Shui-bian’s help in a plan by Chinatrust to merge with another bank and in persuading the government to acquire a piece of land from his bank.

Koo had denied the allegations, saying the money was a political donation to Chen’s Democratic Progressive Party.

Chen Yun-nan said prosecutors accepted Koo’s version of events and said he had not  been charged as the former leader had demanded that Koo pay him the money.

“Koo is considered to be the victim of the crime,” he said.

Chen Shui-bian was first indicted in November and has already been charged with embezzling about $3.15m while president from 2000 to 2008.

He has repeatedly denied the charges, saying he was being persecuted by Ma Ying-jeou, his successor as president, because of his anti-China views.

Chen remains in detention in Taipei and, if convicted, he could face life in prison. 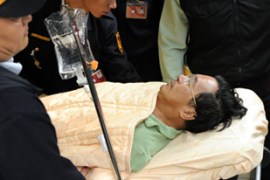 Taiwan ex-president back in court