“My marriage is over. This is no longer acceptable. How can I stay with such a man?” she was quoted as saying in La Stampa.

“Veronica’s choice: Farewell Silvio,” said the frontpage headline of La Stampa while the rival La Repubblica led with the headline: “I’ve decided, I want a divorce”, with both papers quoting close friends.

The two papers both said that Lario had contacted a divorce lawyer and given instructions to proceed towards a separation as quickly as possible.

The reports come only three days after Lario wrote an open letter to newspapers saying that her husband’s well-known penchant for attractive women was a source of “suffering”.

“I want it to be clear that I and my children are the victims and not accomplices in this situation. We must put up with it and that makes us suffer,” she wrote in a letter to an Italian news agency.

The letter, the second such public outburst from Vernonica, dealt mainly with Berlusconi’s choice of young and attractive female candidates with little political experience to represent his Freedom Party in the forthcoming European elections set for June.

In the letter, she said the plan amounted to “shameless rubbish” being put on “for the entertainment of the emperor”.

“What’s happening today [in Italy] behind a front of bodily curves and female beauty is grave,” she wrote.

Berlusconi had reacted to the letter by saying his wife should not believe the “left-wing press”.

He said his centre-right party was aiming to select female candidates because “we want to renew our political class with people who are cultured and well prepared”.

Two years ago Berlusconi issued a public apology to Lario for flirting with young women, among them Mara Carfagna, who he later appointed as equal opportunities minister.

The couple met in 1980, married 10 years later and have three children.

Berlusconi has two elder children from a previous marriage who now hold senior positions in his media empire. His private fortune is estimated by Forbes magazine at $6.5bn.

The pair, who are rarely seen in public together, have long had a tempestous relationship. 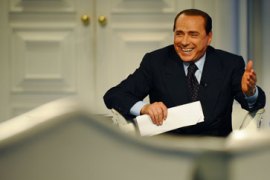 Cruise-ship singer turned media mogul has, despite many challenges, been prime minister of Italy three times.