The man was the third Red Cross worker killed in fighting in Sri Lanka in recent weeks.

The Sri Lankan government has denied carrying out an attack on the makeshift hospital on Tuesday, in the area where government forces are battling fighters from the Liberation Tigers of Tamil Eelam (LTTE).

Mahinda Samarasinghe, the minister for disaster management and human rights, said the army had not launched any air raids or used artillery.

“The presidential secretariat has issued a statement saying that since about two months we have not been using heavy weapons. Aerial bombardments have not been used,” he told Al Jazeera from Colombo, the capital, on Wednesday.

“We continue to show restraint because of civilians being trapped and held hostage by the LTTE. This is a very clear, categorical position by the government.”

Dr V Shanmugarajah, a district government medical officer, had said 49 people were killed and more than 50 injured when the makeshift hospital in Mullivaikal, in the so-called safe zone, was hit early on Tuesday by a mortar shell.

Civilians who had been injured in attacks over the weekend were among those killed when the admissions ward consisting of a tin roof and blue tarpaulin walls was hit.

But Samarasinghe questioned the credibility of statements attributed to Dr Shanmugarajah, saying there was “no free flow of information from the conflict zone under control of the LTTE”.

“Two days ago I saw a doctor on Al Jazeera who was commenting out of this area saying that 372 civilians have been killed.

“When we looked into this, we found that this doctor had not been in contact with the ministry of health since October 2008. So how do you establish the bona fides of people who get on the telephone and say this mayhem is going on?”

Seevaratnam Puleedevan, a Tamil Tiger spokesman, said residents were fleeing in all directions inside the zone and accused the Sri Lankan military of shelling civilians.

“There’s no place to seek shelter or protect themselves,” he said.

The claims and counter-claims are impossible to verify as the government has banned independent reporters and aid groups from the war zone.

But satellite images released by the American Association for the Advancement of Science show craters that seem to indicate heavy weapons had been used recently.

“The government have said they are not using heavy weapons, but the evidence suggests that they are continuing to do so, at least to some extent, and that’s obviously contributing to the dreadful casualty figures that we’ve seen,” he said in Geneva.

Holmes also accused the Tamil Tigers of holding the civilians in the war zone as human shields, a claim supported by testimony from those who have fled the war zone.

Rights group Human Rights Watch also disputed the government’s insistence that it has stopped using heavy weapons in the war zone, but also blamed the Tamil Tigers for trapping civilians.

“Neither the Sri Lankan army nor the Tamil Tigers appear to have any reluctance in using civilians as cannon fodder,” he said.

Tens of thousands of people have fled the fighting in recent weeks to state-run refugee camps, but the UN estimates that about 50,000 civilians remain trapped in the narrow strip of land still held by the Tamil Tigers.

The LTTE is believed to be close to defeat in its 26-year battle for a separate homeland in the north and east of the island for the country’s minority Tamils.

Amjad Saleem, the Sri Lanka director of Muslim Aid, an aid group working to help those displaced by the fighting, said the refugees were malnourished.

“A lot of these people are suffering from long-term malnutrition. Medical facilities are needed. We have outbreaks of chicken pox and hepatitis. We are ramping up our operation and trying to get more doctors in,” he said from a hospital being run in the northern city of Vavuniya, outside the conflict zone.

The government has rejected international calls for a humanitarian ceasefire, saying it would allow the LTTE to regroup.

Tuesday’s attack came after a weekend of heavy shelling that killed more than 300 people and injured more than 1,000 civilians in what the UN has described as a “bloodbath”.

Many of the casualties from that fighting had been taken to the Mullivaikal hospital. 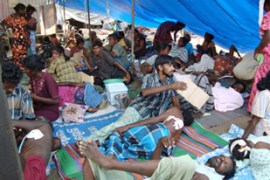 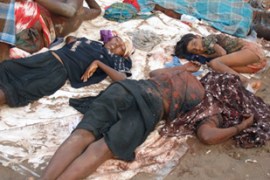 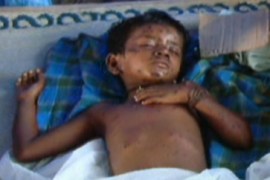 Officials say 257 civilians were killed in one night of shelling in the northern war zone. 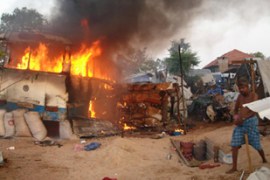 Military and Tamil Tigers blame each other for artillery barrage in “no-fire zone”.