The figures are expected to be confirmed later in the week.

Sunday’s vote was seen as a referendum on a name dispute between Macedonia and Greece, which has blocked Skopje’s admission to Nato.

Greece fears Macedonia could lay claim to its own province of the same name, and has vowed to block Macedonia’s Nato bid until the name is changed.

Speaking on national television, Ivanov said his “three crucial priorities” would be Macedonia’s integration with the European Union and Nato, as well as the solution of the 18-year name dispute with Greece.

In statements early on Monday, Ivanov, 49, said he wanted to work with Athens.

“More than 400,000 people gave me their votes to take responsibility for European Macedonia and to work on solving the problem over the name with our neighbour,” he said.

“I hope we will have energy to overcome these challenges. When we are united domestically, we can resolve the difficulties abroad.”

Hundreds of VMRO-DPMNE supporters gathered in the centre of the capital in celebration, waving red-and-black party flags.

As polls closed on Sunday, a senior European Union official said the run-off election was “generally calm”, but cited reports by observers of limited irregularities.

Earlier, the election commission said the vote was held “in a calm and peaceful atmosphere” without any major “irregularities”.

Macedonia’s interior ministry also said there was no incident or problem in the electoral process.

Past elections have frequently been marred by violence and irregularities.

Nikola Gruevski, the Macedonian prime minister, said the “free, fair, democratic and peaceful” poll was a sign of progress for the country.

“Today the citizens showed democratic capacities and will for free, democratic elections. This is strongly opening our perspective for Euro-Atlantic integration,” he said.

“Macedonia is the winner. VMRO has won the biggest victory in its history.” 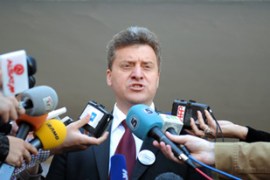 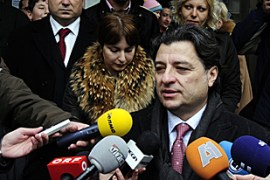 Ruling party presidential candidate to face socialist rival in second round on April 5. 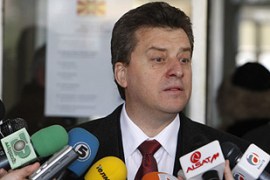 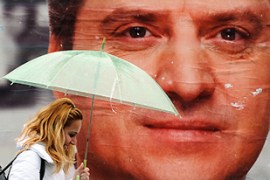