Bout arrived at Bangkok’s criminal court for the hearing on Wednesday in prison garb and with his ankles shackled.

His wife, Alla, among the first defence witnesses called in the long-running case, said her husband had never travelled to Latin America except when the couple flew to Argentina for a three-day holiday.

Bout, who faces life in jail if he is sent to the US and convicted on terrorism charges, said his arrest was the result of a frame-up operation by US intelligence.

Lak Nitiwatanavichan, his lawyer, said his client has been detained for a year without reason and should be allowed to stand trial in Thailand instead of being extradited.

Lak said the judge has asked for legal expert opinion from the permanent-secretary of the foreign ministry and the director-general of treaties and legal affairs on whether the US and Thailand were following the terms of their extradition treaty.

Bout, held at a maximum-security prison outside the Thai capital since his capture, has also asked why the US had not previously sent warrants to Russia calling for his arrest.

US officials allege Bout has been a global gun-runner since the 1990s, using a fleet of cargo planes to send weapons to Africa, South America and the Middle East. 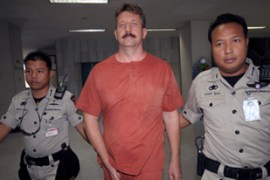 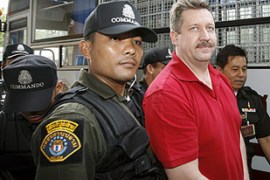 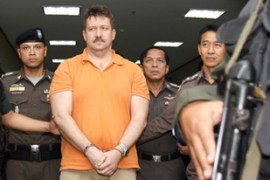