Airlines were particularly affected, with Germany’s Lufthansa and British Airways seeing their shares drop by 12 and 7.7 per cent respectively early in the day. Shares in Hong Kong’s Cathay Pacific Airways and Singapore Airlines also fell.

The H1N1 virus epidemic has so far taken 22 lives in Mexico, with another 81 deaths suspected to be as a result of the new strain.

The virus has spread to the US, Brazil, Spain, New Zealand and Canada.

Singapore and Hong Kong – conscious of the Sars outbreak in 2003 – have warned their citizens against all but essential travel to Mexico.

Darius Kowalczyk, an investment strategist at SJS Markets in Hong Kong, told Al Jazeera that the economic impact of swine flu in Asia could be long-lasting if more deaths are claimed or if the disease spreads.

“If that is the case consumer confidence will have to decline and the global economic recovery would be delayed,” Kowalczyk said.

“Asia as a trading powerhouse is particularly vulnerable because of places like Hong Kong and Singapore with huge numbers of tourists as well as a lot of cargo being moved.”

Kowalczyk said that if a pandemic were to materialise the impact on the world economy, already hurt by a global recession, could be “devastating”.

“You can imagine consumers pulling away from spending money on things that in any way would expose them to contact with a lot of other people – travel, restaurants,” he said.

“Also, cautiousness against what lies ahead would also pull us back from purchasing durable goods.”

Mexico’s finance minister has warned that the outbreak of swine flu could have a negative impact on the country’s economy.

Calling it a “very serious matter” that has a “high potential for disruption”, Agustin Carstens said on Sunday that the outbreak “can have an important impact on the economy”.

Speaking at a news conference after a meeting of the International Monetary Fund (IMF) and World Bank’s joint Development Committee in Washington, Carstens also said there would be no “structural” but only “transitory” damage to the economy.

The epidemic, which emanated from Mexico, threatens to deepen the country’s economic decline amid slumping US demand for Mexican exports.

The Mexican economy shrank 1.6 per cent in the fourth quarter of last year and may have contracted another 4.2 per cent in the first three months of this year, according to a central bank survey of 32 economists published in early April.

The tourism sector, which brought in $13.3bn in 2008 as Mexico’s third-largest source of foreign currency behind oil exports and remittances from Mexicans abroad, could be hurt. 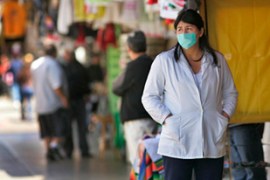 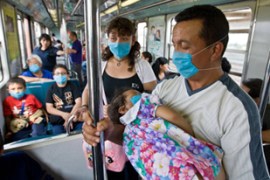