Felipe Calderon, the Mexican president, said on Sunday that his government was doing everything it could to contain what he called an epidemic.

He urged Mexicans to wash their hands, stay home and avoid crowded places.

The government declared an emergency, giving it powers to isolate people, enter homes or workplaces and regulate air, sea and land transportation to try to stop further infection.

Barack Obama, the US president, has said that officials are closely monitoring the cases of swine flu in the country, but that there was no immediate cause for alarm.

Addressing a meeting of the National Academy of Sciences in Washington on Monday, Obama said: “This is obviously a cause for concern and requires a heightened state of alert. But it is not a cause for alarm.”

A public health emergency was declared in the US on Sunday after 20 cases of swine flu across five states were confirmed.

Eight students at a New York City high school were infected and 100 more were suspected to have caught the virus.

About a dozen students are believed to have brought back the virus after spending a week in Cancun in Mexico for a holiday.

Peter Cordingley, the World Health Organisation’s regional representative in Manila, Philippines, said the organisation is of the view that the virus cannot be contained at a local level.

“We’ve seen already that it has spread to the United States. Whether it can be contained globally we don’t know because we don’t know at this stage whether it is going to move globally, although there are good reasons to believe that there is a potential for a pandemic,” he told Al Jazeera.

“Even with avian influenza, when it seemed to stall and it lost the interest of the public, we continued to talk about the pandemic potential. What we are seeing now is a situation that has accelerated far, far faster than whatever happened with avian influenza. We are seriously concerned.”

Richard Besser, the acting head of the US Centre for Disease Control (CDC), told a White House press conference that “we expect to see more cases of swine flu”.

“We’re responding aggressively to try and learn more about this outbreak,” he said.

Janet Napolitano, the US homeland security chief, said everyone entering the US “from a location of human infection of swine flu will be processed through all appropriate CDC protocols”.

Governments elsewhere have also begun to implement screening procedures at ports of entry to try to prevent the virus from landing on their shores.

Officials in Spain’s northeast Catalonia region said they have detected three new suspected cases, bringing the total number in the country to seven.

In New Zealand, a teacher and 13 students from a group of 25 who just returned from a three-week trip to Mexico, were showing symptoms, health officials said on Monday.

The remaining members of the group were being treated at home and remained in isolation, the health ministry said.

And in Brazil, doctors in Sao Paulo were awaiting test results for a patient exhibiting some of the flu’s symptoms after arriving from Mexico, but said his condition improved on Sunday and it was very likely the results would be negative.

Single suspected cases were also reported in France and Israel.

Margaret Chan, the WHO chief, warned on Saturday that the “virus has clearly a pandemic potential”, while Keiji Fukuda, the acting WHO assistant-general for health, security and the environment, said the virus could mutate into a “more dangerous strain”.

But Fukuda said that if there were such an escalation, the world was better prepared now than it has been in the past.

After the outbreak of Severe Acute Respiratory Syndrome (Sars) in 2003, which killed nearly 800 people, and amid regular reported cases of bird flu, countries have stepped up preparations against a pandemic, including stockpiling anti-viral drugs.

Dr John Simon, a consultant in infectious diseases and tropical medicine in Hong Kong, told Al Jazeera that the virus could be treated.

“It is an H1N1 virus and that is easy to treat with anti-viral drugs; I am not saying it is going to be easily containable, but it should be quite responsive to treatment,” he said. 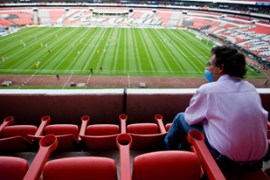 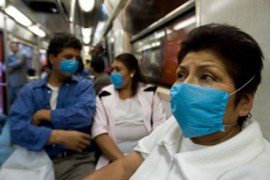 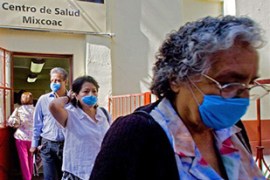