For more than 12 hours on Monday, the “Red Shirts” – most of whom are supporters of ousted prime minister Thaksin Shinawatra – and the soldiers were locked in a series of running street fights.

As dusk fell on the capital, soldiers advanced into an area held by protesters near Government House, the prime minister’s office, setting the stage for what could become a final push to end the demonstrations that have further rocked a country still reeling from political chaos last year and the global financial crisis.

Protesters set several buses on fire to try and block troops as they set up roadblocks to stop more demonstrators from reaching the Government House area.

Roberto Herrera-Lim, the Asia director for the Eurasia Group, told Al Jazeera: “The army as well as the government underestimated the resolve of the protesters in pushing for a confrontation. They were not prepared.”

But he said the Thai government and the military appear determined to remove the protesters from the streets.

“We expect within the next few days that the government will be able to push out the protesters from inside Bangkok. There are bigger questions as to where this conflict is headed down the road.”

In a televised address, Abhisit earlier said the government was taking all steps to ensure public safety.

He said the state of emergency which he declared on Sunday was aimed at restoring calm and would remain for as long as necessary.

He said that troops would only use force in self defence and that protesters had seized three lorries carrying cooking gas and were threatening to blow them up.

Sean Boonpracong, the international spokesman for the United Front for Democracy Against Dictatorship, the group that has been leading the Red Shirts’ protests, claimed the military had used “aggressive tactics” and had been “shooting at unarmed civilians”.

But he told Al Jazeera that “some of us have to fire back in defence with handguns”.

“If things get any worse, there will be more blood and the government will be responsible,” he said, adding that if the army started shooting at protesters, they may occupy Government House for their “safety”, he said.

Panitan Wattanayagorn, a spokesman for the government, said the military had been given live ammunition but were “under strict orders not to aim at the people or not to shoot at the people”.

The loyalty of the police force has been questioned after some policemen were seen putting on red shirts and joining protest rallies.

Thailand has seen weeks of protests by the Red Shirts, who support Thaksin Shinawatra, who was ousted in a military coup in 2006.

Thaksin, who continues to wield considerable political influence in the country despite being in exile, has called for his supporters to overthrow the government, promising to return if the government moves to crack down on protests.

“It was a very calculated move to support the current government, which the military did not do when the current prime minister was in the opposition,” he said.

Those protests eventually led to court rulings that deposed the pro-Thaksin governments and ushered in Abhisit’s government. 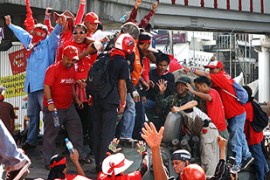 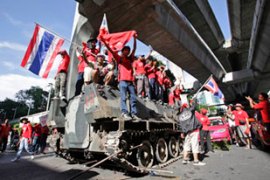 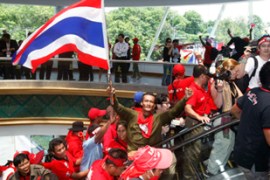