On June 18, 2009, the administration of Barack Obama, the US president, was required by law under the Goldwater-Nichols revisions to the National Security Act of 1947 to issue its ‘national security strategy’ within 150 days of coming into office.

Many administrations miss the deadline but most have taken the creation and promulgation of the president’s foreign policy framework very seriously and eventually get this report out.

But the bottom line about the new team is that there has not been much time to launch a refined and peer-reviewed ‘national security strategy’ out of the starting chute.

The absence of a presidential plan means that it is very hard to discern in the Obama administration’s moves whether there is a broad strategic course into which the president’s Afghanistan decisions fit – or whether his plans are a function of inertia and ad hoc responses to crises in the AfPak region.

The evening before Obama gave his address at the US military academy at West Point on ‘The way forward in Afghanistan and Pakistan’, a senior White House official told me that the US president had no good choices to make in Afghanistan and would instead try to sculpt an approach that was the least bad.

Obama would attempt to manoeuvre the US into a position of greater leverage over the government of Hamid Karzai, the Afghan president, and to fast-track capacity building in the Afghan army and police forces, said the official, who added that since coming to office, Obama has tripled US forces in Afghanistan.

However, as the official told me: “The top third of these [additional forces] are available for just 18 months.”

Since Obama’s speech, Michael Mullen, the chairman of the joint chiefs of staff, Hillary Clinton, the secretary of state, and Robert Gates, the defence secretary, have been spreading quick sand around the president’s statement on an 18 month time frame and his plan to begin drawing down this surge of forces in July 2011.

To add to the confusion over whether the July 2011 date is really hard or really soft, I received a communication from another senior White House official on the national security team on the day of Obama’s speech. I was emailed a note to the effect of:

“[The president’s policy] sets a clear, narrow and achievable goal for Afghanistan: deny al-Qaeda sanctuary, disrupt the Taliban so it cannot topple the government and accelerate transition to Afghan responsibility for their own security and governance. It is not nation building, it is not open ended. The strategy calls for a commitment of additional resources up front. But it also tells American people how and when this ends [emphasis added].”

The president’s political quandary is as clear as day – what is not so clear is the strategic course.

On the one hand, Obama has a good sense of the scepticism of the US progressive left and the realist right that these force deployments into Afghanistan feel more like stumbling into a policy rather than scripting one that bridges realistic AfPak objectives, resources, and national will. These interests wanted to hear language about an exit game plan and drawdown after a long, frustrating, eight-year slog.

On the other hand, there are many in America’s ‘strategic class’ who have reconstructed the Vietnam rationale that a US drawdown would be seen as a failed test of US resolve to squelch its foes in a power-defining war. They believe that to pull out would embolden enemies and reify key doubts among allies about the US’ global power.

Adding to the challenge, one of the reasons why Taliban interests have gained such momentum over the last year – signing up thousands of village chiefs in to the growing Taliban zone of influence – is that many Afghan citizens believe that the US military will leave in the near term.

The key priorities of these local political leaders are the protection of key trade routes and basic physical security.

With US staying power in doubt and the Taliban willing to provide these two public goods in exchange for other ‘costs’ (i.e. a religious order that strips women of any modern rights), the Taliban has real momentum. Even Obama recognises this and stated that it must be knocked back.

On yet another dimension, Pakistan’s security forces, which helped fund and build the Afghan Taliban as their own proxy in Afghanistan, also believe that the US will depart, leaving Afghanistan vulnerable to incursions by India.

While the Pakistan military and intelligence arms are purging their country of the ‘Pakistan Taliban’ to a significant degree, Pakistan cannot be counted on as an ally in the battle against the ‘Afghan Taliban’ as long as it fears India meddling in Afghanistan.

Can a dependable India-Pakistan rapprochement be achieved in an 18 month window, to coincide with the force surge, with the aim of changing the dynamics of Pakistani support for US enemies in Afghanistan?

Working to achieve a world-altering agreement between India and Pakistan – including the resolution of the Kashmir dispute and engagement in a set of confidence and trust building initiatives that would finally squeeze out their proxy war in Afghanistan – is a strategically impressive goal.

Some observers, like the Pulitzer Prize winning South Asia expert Steve Coll, think that this is not only doable but important enough to justify a well-resourced US commitment to the kind of stability Obama outlined.

Count me as highly sceptical.

In the near term, to roll back the growing momentum of subscribers to Taliban authority, the US needed to convince both Afghans and Pakistanis that it was going to dig deep and long into an AfPak stabilisation strategy.

Obama’s speech, which pleased observers like me for narrowing our AfPak national security objectives and talked squarely about needing to frame an off-ramp to this dangerously addictive conflict, nonetheless has confused American civil society, the US military, and our allies in Pakistan and Afghanistan.

The speech’s earnestness was clear – a desire to end the conflict and then get out – but it did very little to bring to a close the US’ structural, strategic confusion.

The US president did tell those on the ground in AfPak that the US was not only staying but pumping up its capacity to do more – but then framed the near term departure of these same forces.

This make-everyone-happy (but ultimately unhappy) approach to national security decision making is why I believe a drawdown to Biden-suggested levels of both mission and troop levels was a healthier course for the country.

We may have some in the administration who can frame the challenges and suggest prescriptions, but fundamentally the key voices of US national security policy continue to issue an inchoate frame for understanding how the US will succeed in Afghanistan in such a way that it can ever withdraw – not only from an internal Afghan civil war but from an ongoing dangerously suspicious dance between Pakistan and India.

Before being drafted back into service by Obama, Jim Jones, the national security advisor, was a co-chair of a non-governmental group called ‘The Project on National Security Reform’. This group, led by Jim Locher, a Goldwater-Nichols expert on national security decision making processes, advocates for a restructured decision making machine around the US president – one that will require legislative fixes to broaden both the participants and structure of national security strategies.

This may sound like a bureaucrat’s fantasy about bureaucratising responses to conflicts, but it is important to stand up a process that takes a broad look at all of the US’ national security goals and resources and synthesises them in a way to prevent a group in government hijacking control of the operation.

For too long now, this very deliberative national security strategy review process on Afghanistan, which lasted more than three months, looked too dominated by military interests – reinforced optically by Obama’s decision to present his strategy at West Point rather than from the Oval Office, which was more appropriate for a decision of this magnitude.

Jones, his deputy Tom Donilon and Denis McDonough, the national security council chief of staff, are believers in taking the time to think through all scenarios and generating a strategy grounded in realities as they are – rather than as others would like them to be.

But to convince serious observers that we have moved from the ad hoc and politically shaped to well-informed strategic judgment calls, much more needs to be done and seen in Obama’s policies.

This speech basically kicked the bucket on Afghanistan down the road another year -much like Obama did last March.

It is time to get serious about the geopolitical downsides of the Afghanistan war, not to mention a financial commitment greater than the annual cost of US healthcare reform, and to begin dealing with our national security concerns in the AfPak region through other means and in a way that fits a newly developed national security strategy that affirms the perception of the US’ global leadership. 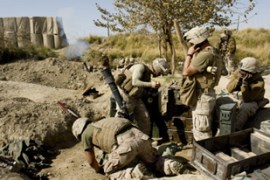 Nato says allies to send 7,000 additional troops in US drive to step up operation.

US secretary of state positive that allies in Afghanistan will pledge extra troops.