Riots followed the bombing, which struck as Shia worshippers marked Ashoura, the holiest event on the Shia Muslim calendar.

Karachi religious and political leaders have called for a strike for Friday to condemn the attack, one of the worst in the city since 2007.

Angry mourners torched hundreds of cars and shops, threw stones at ambulances and fired bullets into the air.

“Our office and the whole building is completely burnt. Everything has been destroyed,” Saleem Khan, who runs a car rental business in the city, told the Reuters news agency.

Authorities called for reinforcements from the city of Hyderabad, 170km away.

Asif Ali Zardari, Pakistan’s president, later blamed group’s such as the Pakistani Taliban for trying to turn Shia and Sunni Muslims against each other.

“A deliberate attempt seems to be afoot by the extremists to turn the fight against militants into a sectarian clash and make the people fight against one another,” he said in a statement.

Imran Khan, Al Jazeera’s correspondent in Islamabad, said: “The Shia community would certainly have been the specific target of this attack.

“The Shia are in the minority but make up a significant number of Pakistanis.

“They are woven into the fabric of Pakistan. However, they are under attack for their beliefs.”

Fazal Qureshi, the chief editor of the Pakistan Press International news agency, told Al Jazeera: “These processions cover long distances, they were marching through the central road when suddenly the bomber blew himself up.

“It is impossible to stop someone who is prepared to die. There is an atmosphere of fear throughout the city.”

Talat Hussain, the director of news and current affairs at local Aaj TV, told Al Jazeera that there were claims that the fires had been set to further stoke the tensions

“This is exceedingly damaging because as reports now filter out … there is a suggestion and credible information that deliberate arson was made to spread the mayhem,” he said.

“Therefore the question that is being asked is whether this was not an extraordinary reaction but an attempt to exploit an already bad situation.

“Who are these people who were indulging in burning businesses down?”

“Police arrested more than 100 people in past months who were plotting to launch attacks in Karachi,” he said.

Pakistan had tightened security to protect mass processions before Ashoura, deploying tens of thousands of police and paramilitary forces.

The attack in Karachi was the third on the commemorations in Pakistan this year.

A suicide attack at a Shia mosque in Pakistani-administered Kashmir on Sunday killed seven people, while wxplosives wounded 17 people in Karachi on the same day. 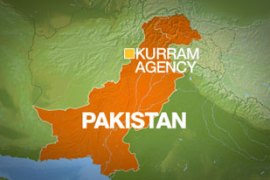 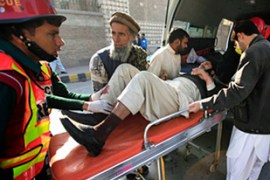 At least seven killed as attack in Peshawar is followed by another one in Rawalpindi.