The International Committee of the Red Cross has for the first time visited prisoners held by the Taliban in Afghanistan.

The Red Cross, or ICRC, said in a statement that it had twice visited three members of the Afghan security forces held by the Taliban in the northwest Baghdis province.

Reto Stocker, the group’s head of delegation in Kabul, speaking to Al Jazeera on Wednesday called the visit an “achievement”.

“I think this really has created an environment where there is a basic trust in the ICRC [Red Cross]. I think we are credible and predictable,” he said.

The visits, which took place at the end of November, mark the first time the ICRC has visited people held by the Taliban since the US-led invasion of Afghanistan in October 2001.

“We plan to conduct and repeat visits in other regions, and hope to visit people held by other armed opposition groups, with the aim of ensuring that everyone detained in relation to the armed conflict is treated humanely,” Stocker told the media earlier.

The ICRC has said it is unable to give a reliable estimate of the number of people held by the Taliban or other armed groups in Afghanistan.

Carla Haddad Mardini, an ICRC spokesperson, said that efforts were continuing to get access to Bowe Bergdahl, a US soldier who was captured by the Taliban in June.

“For the ICRC, access to this prisoner remains a priority,” Mardini said.

Bergdahl was the the first US soldier to be seized by the Taliban since the US-led invasion.

The ICRC has visited 136 places of detention in Afghanistan and has registered more than 16,000 people since the US-led invasion that forced the Taliban from power.

“International humanitarian law grants the same protection to everyone held in connection with the armed conflict, whether the detaining party is the international or Afghan security forces or the armed opposition,” said Stocker.

The ICRC has been active in Afghanistan since 1979, when the Soviet Union invaded the country, said Simon Schorno, a spokesman for the ICRC in Geneva.

“In Afghanistan for years we have been in touch and engaging in discussions and dialogue with [the] Taliban because they are simply party to the conflict,” he said. 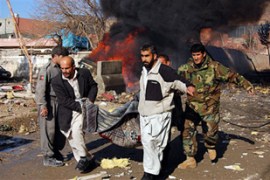