“He wanted to go home right away, but he is being held as a precaution,” Klun said.

A 42-year-old man who had a 10-year history of mental problems, was arrested following the attack, police said.

Scuffles had broken out after about 10 people jeered Berlusconi at  the rally of his People of Freedom party, calling him a “clown”.

He shouted back; “Shame on you!” and drowned out their heckling with the help of the sound system.

The attack comes at the end of a difficult year for the controversial prime minister.

His popularity recently plummeted after accusations of sexual encounters with escorts, a separation from his wife, the loss of immunity prosecution and the re-start of two corruption trials.

On Friday in Milan, one corruption trial in which Berlusconi is accused was adjourned until January 15.

Mills, who was tried separately, was sentenced to  four-and-a-half years in jail over the case in February. 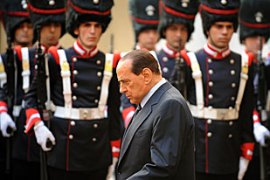