According to Xinhua, Zhang produced more than 770 tonnes of melamine-laced protein powder while Geng sold more than 900 tonnes of tainted milk.

The 19 others convicted over the scandal were sentenced to varying jail terms.

The scandal led to recalls of hundreds of products in China and around the world.

During the trial earlier this year it emerged that Sanlu dairy officials had become aware of the melamine problem in early August 2008, but the first public warnings were not issued until mid-September as China strove to put on a perfect face for the Beijing Olympics.

Tian Wenhau, Sanlu’s former general manager, received a sentence of life in jail for her role in the case.

At the time, many families of children poisoned by tainted milk expressed anger that she had not also been sentenced to death.

Tian’s appeal against her sentenced was rejected in March, Xinhua reported on Tuesday.

Melamine is believed to have been added to disguise milk that had been watered-down in order to increase profits for producers.

The chemical’s high nitrogen content allows protein levels to appear higher when it is added to milk or animal feed.

It is commonly used in making plastics, fertilisers and concrete but can cause kidney stones and kidney failure if ingested by humans.

In early January Sanlu and more than 20 other dairy firms sent a text message to millions of mobile phone users across China asking forgiveness over the scandal.

“We are deeply sorry for the harm caused to the children and the society,” the text message said.

“We sincerely apologise for that and we beg your forgiveness.” 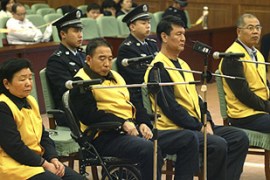 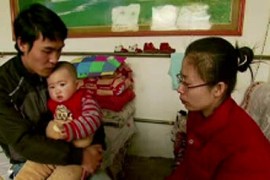 Families struggle to pay for medical care for babies sick from melamine-laced milk. 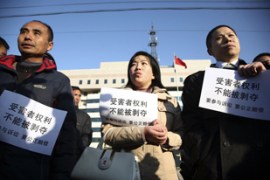 Text messages sent to millions of consumers beg for forgiveness over milk scandal. 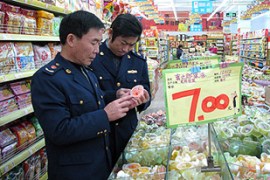 Dairy company at centre of scandal that killed six infants and sickened many more.