Speaking to Al Jazeera, Senator Bob Brown, leader of the Australian Green Party, said the leak had been “a catastrophe for the environment” which now threatened to get even worse.

“The news goes from bad to worse. It’s one of the biggest environmental catastrophes in Australian history,” he said, pointing to what he said was poor government oversight of the company’s efforts to tackle the leak.

Oil workers had made several attempts to try to plug a leak more than 2.5km under the sea bed when the fire broke out.

“Current operations are focused on reducing the intensity of the fire,” Ferguson said in a statement.

“Some of the world’s leading experts are working to fix the leaking well and respond to this latest problem.”

The rig which began leaking oil on August 21 has since spewed between 400 and 2,000 barrels of crude into the Timor Sea each day.

It had been due to start commercial operations this month.

Environmentalists estimate about 10 million litres of oil have emptied into the Timor Sea so far, saying the leak had seriously harmed wildlife and that its effects could be felt for 20 years.

They have said that efforts to clean up the slick, using chemical dispersants, could have an equally damaging effect on wildlife.

An Australian government report said birds and marine species were at risk from the oil spill, but added that the full impact could not be immediately determined. 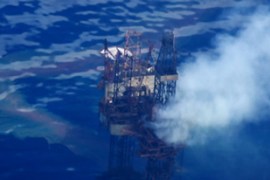 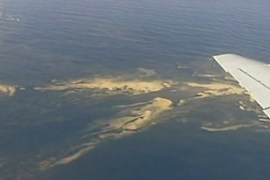