His family in Tehran said he was closely questioned by Saudi police at the airport and later called his wife from Medina, in Saudi Arabia, before apparently vanishing.

In a sign of the sensitivities surrounding Amiri, Iranian officials have not publicly identified him as a nuclear scientist, referring to him only as an Iranian citizen.

Manouchehr Mottaki, Iran’s foreign minister, on Wednesday accused the US of involvement in Amiri’s disappearance.

“We have found documents that prove US interference in the disappearance of the Iranian pilgrim Shahram Amiri in Saudi Arabia,” he told reporters, according to the website of state Press TV.

The report did not give details, but quoted Mottaki as saying Iran held Saudi Arabia responsible for failing to protect Amiri.

Iran’s ISNA news agency referred to “some rumours” that Amiri was an employee of Iran’s Atomic Energy Organisation and wanted to seek asylum abroad.

Meir Javedanfar, an Iran analyst based in Tel Aviv, said the most likely scenario was that Amiri had defected.

“It’s very difficult to say whether he defected voluntarily or whether he was kidnapped, but if you go back and look at the precedents, it is possible he is what some people call a ‘walk-in’,” he told Al Jazeera.

“If he went to Saudi Arabia of his own initiative and he disappeared like that, I think – based on what happened to General Reza Asgari – we can’t rule out that he perhaps walked in himself with the information in order to give himself up and work with the Americans.”

Turkish, Arabic and Israeli media suggested he defected to the West, but his family has dismissed that.

Javedanfar also said Amiri’s disappearance in Saudi Arabia would be of particular concern to Tehran.

“There is concern about Saudi Arabia because the Saudi government has been trying to reduce Iran’s hand in the region,” he told Al Jazeera.

“They scored a victory in the Lebanese elections where Hezbollah [which is backed by Iran] lost, and now we see the Saudi king in Damascus. The Iranian press see that as an effort by Riyadh to reduce Iran’s hand.

“If you put all these together, I think the Iranian government is particularly worried that this happened on Saudi soil.”

Iran is involved in a stand-off with the West over its nuclear energy programme, with the US and its allies saying Tehran is seeking to develop nuclear weapons.

Malek Ashtar University, where Amiri reportedly worked, is involved in the implementation of “special national research projects” and has faculties in aerospace, electrical engineering and other topics, according to the university’s website.

Amiri disappeared more than three months before the disclosure of a second uranium enrichment facility that Iran has been building near the city of Qom.

The underground plant was kept secret until Iran disclosed its existence last month.

Diplomats say it did so only after learning that Western intelligence agencies had discovered the site. 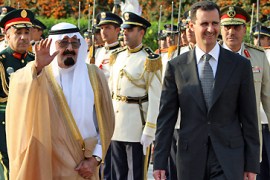 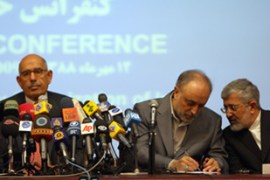