Once the heartland of Sunni Arab opposition to the US-led invasion of Iraq, Anbar province has calmed down since some influential tribes joined US troops to fight al-Qaeda in Iraq in 2007.

However, anti-government fighters have shown they are still capable of striking government targets with roadside bombs, shootings and suicide attacks remaining common.

Violent deaths in Iraq dropped by more than half in September compared to the previous month, official figures showed last week, with 203 people killed across the country.

September’s death toll was the lowest since May, when a total of 155 people were killed. 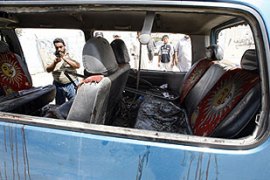 Up to six mourners killed in town of Haditha in Anbar province, police say.