Noor Mohammad Noor, a spokesman for the IEC, announced: “It will go to a second round on November 7. The reason was Karzai’s vote was 49.67 and could not reach above 50 per cent.”

In a news conference in Kabul soon afterwards, Karzai said that he accepted the findings of the fraud panel and confirmed that the run-off would be held.

“We believe that this decision of the IEC is legitimate, legal and constitutional and that it strengthens the path towards democracy,” he said in remarks televised live on Afghan television.

He said that that he hoped the forthcoming days before the poll would pass off peacefully.

Their presence in Kabul underscored intensive Western lobbying of Karzai to resolve the weeks of political paralysis.

Kerry said that with the announcement of a second round, “a time of enormous uncertainty has been transformed into a moment of great opportunity”.

There have been growing signs that US patience with Karzai is wearing thin, as Barack Obama, the US president, considers whether to deploy thousands more troops to Afghanistan.

After a visit to Pakistan, Kerry diverted his plane back to Kabul for hurried talks with Karzai late on Monday. The British and French ambassadors reportedly also joined the meeting.

Speaking in Washington Obama welcomed Karzai’s decision, calling it an important step forward after what he said had been “a very difficult time in Afghanistan”.

He added: “President Karzai, as well as the other candidates, have shown that they have the interests of the Afghan people at heart, that this is a reflection of a commitment to a rule of law and an insistence that the Afghan people’s will should be done.”

The campaign behind Abdullah Abdullah, Karzai’s closest rival who will challenge him in the run-off, said they were prepared for the vote.

“We had hoped the president would accept the second round,” Fazel Sangcharaki, Abdullah’s spokesman, said.

Wali Massoud, an adviser to Abdullah and a former ambassador to the UK, told Al Jazeera: “We are very pleased that, after months of denial, President Karzai today admitted there was massive fraudulance and rigging.”

Massoud also raised concerns about the IEC, which ran the August 20 vote and will also run the second round.

“If only was had an independent commission we would not have had this problem [over the vote] in Afghanistan for months.”

Obama later commended the two camps acceptance of a run-off.

“President Karzai, as well as the other candidates, I think have shown [that] they have the interest of the Afghan people at heart, that this is a reflection of commitment to rule of law and an insistence that the Afghan people’s will should be done,” Obama said.

But Shukria Barakzai, an independent Afghan MP, said the run-off was a disappointment for the Afghan people and had come about due to international interference.

“That was the most unjust announcement,” she told Al Jazeera.

Barakzai warned that the security situation in Afghanistan had further deteriorated since the August 20 vote. The Taliban had announced then that it would target voters.

Highlighting those security concerns, on Tuesday at least seven truck drivers were killed when a convoy carrying supplies for Nato forces was attacked by suspected Taliban fighters in the southern province of Ghazni.

“The people of Afghanistan have been waiting for almost two months,” Barakzai said.

“During the election day they risked [their lives] and went to the polling station in this exercise of democracy … Who can guarantee for Afghans that the next election will be free of fraud and a fair election?”

Prior to the announcement of a second round there had been intense speculation that Karzai and Abdullah would reach a power-sharing deal.

James Bays, Al Jazeera’s correspondent in Kabul, reported: “We understand from high placed sources that there were detailed talks between the camps … They were talking about who was going to get which ministry.

“Abdullah was demanding the interior ministry. His people were talking about getting some 12 cabinet seats.”

But speaking at Tuesday’s news conference, Kerry denied there had been any discussion of a national unity government. 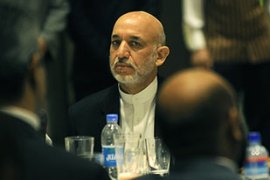 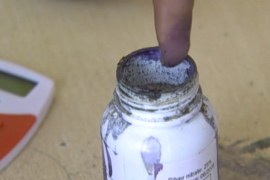