“He is of course someone who has previously been convicted of people smuggling offences and well known to Australian and Indonesian authorities,” Smith said hours before heading for Jakarta.

“Let’s now leave that to the Indonesian judicial and legal processes to take their course.”

Smith and Kevin Rudd, the Australian prime minister, are due to attend the inauguration of Susilo Bambang Yudhoyono, the Indonesian president. The trip will also include talks on people smuggling.

Indonesian officials were trying to negotiate with the Sri Lankans, who have threatened to set fire to their boat if they are forced to disembark in Indonesia and undergo asylum procedures that could take years.

A spokesman for the Sri Lankan asylum seekers, who at the weekend ended a hunger strike launched after they refused to disembark their vessel moored in a port in west Java, confirmed that Captain Bram was on board.

The spokesman, known as Alex, said the vessel was intercepted after Captain Bram turned the boat around before they could land in Australia, after failing to make a rendezvous with a smaller boat that would have returned him to Indonesia.

He said Captain Bram did that to avoid being caught by authorities in Australia, where people smugglers can be jailed for up to 20 years.

“The selfish move that he has made has cost 260 lives… a decision that he made… to save himself has ruined our families’ lives as well,” he told public radio. “It has destroyed a dream that people were searching for freedom.”

Three Indonesian men were due to appear in court in the western city of Perth charged with people smuggling offences after two boats carrying 146 people were intercepted on September 12. 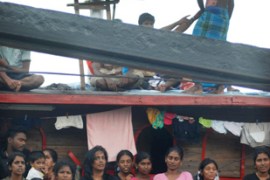