“And that will create a new atmosphere in Turkish-Israeli relations as well.

“But in the existing situation, of course, we are criticising this approach, [the] Israeli approach.”

Haaretz, the Israeli newspaper, reported that Israel’s foreign ministry had convened an emergency meeting on Sunday to discuss Turkey’s decision.

A senior source at the ministry told Haaretz that there were concerns that strategic ties with Turkey were in jeopardy after the Gaza assault of December 2008 and January.

Ercan Citlioglu, head of the strategic research centre at Istanbul’s Bahcesehir University, said: “Turkey is the only friendly country with Israel [in the region] … [but] it has very good relations with Syria and Iran.

“Syria and Iran are hostile countries to Israel, that’s why Turkey’s support to Israel’s policies in the region should be of vital importance to Israel.”

Turkey and Israel have been long-term allies but ties have deteriorated dramatically since Ankara condemned the Gaza assault, which left hundreds of Palestinian civilians dead in addition to Hamas members.

In particular, tensions soared after Recep Tayyip Erdogan, Turkey’s prime minister, stormed out of a conference during the Davos summit this year where he confronted Israel’s President Shimon Peres over the Palestinian casualties.

Turkey’s surprise cancellation of drill is the first time its criticism of Israel has been translated into concrete action.

A brief statement posted on the Turkish military’s website said the drill had been cancelled after “international negotiations conducted by the Turkish foreign ministry”.

Israeli defence officials, speaking on condition of anonymity, said that in response to Turkey’s decision against Israel, the US pulled out of the exercise, forcing Ankara to cancel the drill.

The officials expressed disappointment with the decision saying that beyond the diplomatic damage, the drill was an important training opportunity for Israeli pilots, who generally are confined to Israel’s limited airspace.

Israel has supplied hundreds of millions of dollars of military equipment to Turkey over the years and has renovated Turkish tanks and fighter jets.

The two countries have also conducted joint naval exercises, including a drill with the US in the Mediterranean in August.

The Israeli air force has trained over Turkish airspace and last year Turkey hosted months of indirect talks between Israel and Syria after an eight-year breakdown. 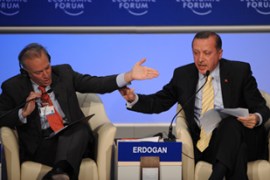 Turkey PM returns to grand reception after clashing with Israeli president over Gaza. 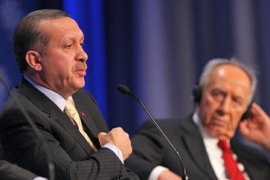 Turkey’s prime minister walks out of Davos after a row with the Israeli president.

Stormy debate in Davos over Gaza

Turkish PM walks out after verbally clashing with Israeli president over Gaza war.