When the Turkish and Armenian foreign ministers meet in Switzerland on October 10 to sign an agreement to normalise relations, they will put a century of conflict and controversy behind them.

The draft protocols of agreement, first made public on August 31, seek to establish diplomatic relations and the possible reopening of the long-closed Turkish-Armenian border.

However, the draft protocols have sparked heated debate among nationalists on both sides and provoked outraged condemnation from many diaspora Armenians.

There have been protests in the Armenian capital Yerevan and demonstrations across Argentina, Canada, France, Lebanon, Russia and the US.

The move to sign the protocols comes one year after an historic visit to Armenia by Abdullah Gul, the Turkish president and follow, reportedly, months of secret talks brokered by Swiss mediators.

Earlier this month, Serzh Sarkisian, the Armenian president, began a world tour of diaspora Armenian communities in an effort to alleviate their concerns and explain his government’s position.

However, it is doubtful he will succeed as many Armenians believe the protocols relinquish too many of their rights for far too little in return.

Pitched as a means to boost landlocked Armenia’s stagnant economy, the protocols are being rushed through the legislature in the capital Yerevan.

Critics believe the protocols have been hastily drawn up and largely favour Turkey.

If the protocols are ratified, they say, Armenia would essentially forfeit its right to demand that Turkey recognise, and be held accountable for, what they describe as the genocide in which more than 1.5 million Armenians perished.

Ankara has always rejected such charges and says many died on both sides during the First World War. Many Turks were also killed in what Turkey calls a civil war caused by the collapse of the Ottoman Empire. The number of Turks who died cannot be verified but both Turkey and Armenia agree not as many Turks as Armenians died.

The protocols call for the establishment of an independent fact-finding commission to “determine the truth”.

“These protocols, by establishing a historical commission, fuel Turkey’s denial of the Armenian genocide, a policy that represents a grave offence to the Armenian nation and a direct security threat to the Republic of Armenia,” says Aram Hamparian, executive director of the Armenian National Committee of America.

“In requiring that the borders be recognised first, as a precondition for even the establishment of relations, the Turkish side clearly seeks to pressure the Armenian government into forfeiting the rights of all Armenians to a just resolution of this crime.”

In 1988, Armenia and Azerbaijan clashed over the disputed enclave of Nagorno-Karabakh after ethnic Armenians declared their independence from Azerbaijani rule.

Armenian forces seized control of the disputed territory and seven surrounding regions from Azerbaijan in the early 1990s and declared an independent state – the Nagorno-Karabakh Republic.

Turkey sided with Azerbaijan, a country it feels is a traditional and ethnic ally, imposed an embargo on Yerevan, and closed the border thereby preventing land-locked Armenia from easy access to European trade.

Despite repeated diplomatic efforts since a tenuous ceasefire took hold in 1993, Armenia and Azerbaijan have failed to negotiate a settlement on the region’s status.

However, since the protocol agreements were first drafted, Turkey has promised that it will re-open borders with Armenia, leaving Azerbaijan fearful of losing any leverage it may have had in final settlement talks.

Nagorno-Karabakh Republic, meanwhile, fears losing its only real support for independence in Yerevan in favour of the protocols with Turkey.

Joseph Kechichian, editor of the Journal of the Society for Armenian Studies, told Al Jazeera: “The Turks are in a bind vis-a-vis Azerbaijan because if, and when, they open the border, Azerbaijan will fall back into even more irrelevance.”

“Watch for added Azeri pressure on Turkey in the weeks and months to come. What kind of economic sweeteners will be dangled by Moscow and Ankara in front of Yerevan and Baku will probably determine whether contemplated accords will work,” he said.

Kechichian also believes that ratification of the protocols will strengthen US influence in the region, if indirectly, through its traditional ally and fellow Nato member Turkey.

Some experts believe that since the visit of Barack Obama, the US president, to Turkey in April, there has been growing momentum in the Middle East and South Caucasus to position Ankara as a counterweight to Iranian and Russian influence in the region.

“Sadly, it would seem that the US, in pressuring Armenia to accept the one-sided terms of these protocols, is effectively acting as Turkey’s surrogate in the region,” says Hamparian.

Vartan Oskanian, a former Armenian foreign minister, has also voiced reservations. While supporting the establishment of normal relations with Turkey, he maintains he “would have never signed this document”.

According to Oskanian, the protocols – prepared with the participation of the US and other influential countries – do not serve Armenian interests.

He has urged people to hold mass rallies “so that the authorities can understand that 70 per cent of the people [are] against it”.

But many Armenians inside the country believe that “bread-and-butter” realities must precede any lofty historical principles.

Relations with Turkey, they argue, are essential to improving Armenia’s crippled economy. They dismiss as irrelevant the protests and condemnations by diaspora Armenians, many of whom are descendants of survivors who fled Turkey in 1915.

They insist that the policies and economic vicissitudes of the Armenian republic have no direct, or even indirect, impact on their lives, and as such, those outside the country do not have the right to interfere.

Richard Giragosian, the director of the Armenian Centre for National and International Studies in Yerevan, contends that “open borders and normal relations are essential and stand as prerequisites to development and stability”.

“An agreement with Turkey would offer Armenia an immediate end to the country’s dependence on Georgia, and would do much to lessen over-dependence on Russia by bringing Armenia closer to the West, while also bringing Europe closer to Armenia,” he says.

“And in a strategic sense, the normalisation with Turkey is an imperative for overcoming the two strategic threats now facing Armenia – isolation and insignificance.”

But if the US is attempting to wean Armenia from its traditional allies, notably Russia and Iran, and to alter the dynamics in the Caucasus, there may be challenges.

“Armenian-Russian and Armenian-Iranian ties are immensely important to Yerevan. They may be impossible to break given Armenia’s survival instincts. Nothing will jeopardise that,” says Kechichian.

“Lest we forget, both Russia and Iran provided vital assistance to Armenia during some of its darkest hours after independence in 1991, when the country confronted a systematic embargo that was akin to strangulation.

“Moscow and Tehran may well have acted for their own strategic reasons to aid Yerevan, but the critical support was a life-saver nevertheless.”

According to Harry Hagopian, a London-based international lawyer and EU political consultant with the Paris-based Christians in Political Action group, the geopolitical situation in the Caucasus has changed drastically since the Georgia-Russia war.

He believes that it is not simply altering the political balance in the region or possible membership of the European Union that is at stake. The key issue, he says, is oil.

“Signing the protocol on the historic lands would allow Turkey to use them for its energy and transport routes – including the Nabucco pipeline project – without any possible legal prejudice.

“I do not claim that those lands could return to Armenia, but a customary line has been gratuitously crossed in those protocols between territorial integrity on the one hand and the recognition of current borders on the other – a distinction which is applied by many countries both in the Caucasus and elsewhere worldwide, so why not in this instance too?” he points out.

Armenia’s needs notwithstanding, the speed with which the protocols were presented and are being imposed on the diaspora indicate that powerful outside forces are at play.

For Yerevan, however, these must be secondary concerns given the historical burden that the Armenia assumes on behalf of the Armenian nation.

It remains to be seen whether decisions made by politicians will bridge the growing gulf that has emerged between the two to three million citizens of the Republic of Armenia and the estimated seven to eight million Armenians living in the diaspora.

“The Armenian government erred when it did not consult more transparently with the diaspora and [instead] sprang the agreement on them in the way it did last August,” says Hagopian.

“After all, just as Israel listens to its Jewish lobbies worldwide and even uses them to pursue its national interests, Armenia should have done the same with its own diaspora.” 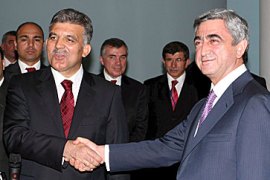 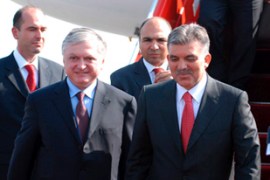 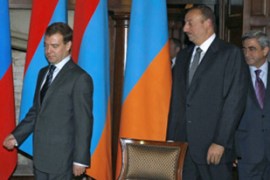 Leaders call for “peaceful resolution” to their dispute over Nagorny Karabakh province.