Ging said Unrwa regularly provided the Israeli army with exact geographical co-ordinates of its facilities and the school was in a built-up area.

“Of course it was entirely inevitable if artillery shells landed in that area there would be a high number of casualties,” he said.

Mark Regev, a spokesman for the Israeli prime minister, said initial findings were “that there was hostile fire at one of our units from the UN facility”.

“Our unit responded. Then there were explosions out of proportion to the ordnance we used,” he said.

Avital Liebovich, an Israeli military spokesperson, told Al Jazeera that Hamas had “booby-trapped” installations in Gaza and Israel had no choice but to retaliate.

At least 660 Palestinians have been killed in Gaza and nearly 3,000 wounded in the offensive that began on December 27.

Four Israeli soldiers were killed and 24 wounded in battles around Gaza City on Monday night, the Israeli military said early on Tuesday, bringing the Israeli toll to eight.

The Israeli military also appeared to be broadening its assault on the Gaza Strip as heavy artillery fire was reported from Khan Younis.

Palestinian witnesses said Israeli tanks had moved into Khan Younis, the second biggest urban area in the strip after Gaza City, in what appeared to be an attempt to isolate it from the border town of Rafah.

He stressed that news teams could not confirm the reports as they were unable to reach the south from Gaza City in the north because the strip had been dissected by Israeli forces.

Despite its apparent broadening of its offensive, Israel has not been able to achieve its declared goal of stopping Palestinian rocket fire, with about 30 rockets launched across the border into Israeli town Sderot and surrounding areas on Tuesday.

Fierce clashes between Israeli troops and Palestinian fighters were also reported in Jabaliya in the northern Gaza Strip and two black plumes of smoke could be seen rising over the area.

Fares Akram, a Gaza city resident, told Al Jazeera there was “no safe place in Gaza” as “the Israeli war planes don’t stop dropping bombs and firing missiles into Gaza”.

In addition, the humanitarian situation in Gaza – already bad following the 18-month Israeli blockade of the strip that left the territory desperately short of fuel, food and medical supplies – is worsening.

Unrwa’s Ging said he was “shocked” by “the brutality of the injuries” he had seen during a visit to the Shifa hospital in Gaza.

“There are very real shortages of medicine. This hospital has not had electricity for four days. If the generators go down, those in intensive care will die. This is a horrific tragedy here, and it is getting worse by the moment,” he said.

Ging described the situation as “the consequences of political failure and complete absence of accountability for this military action” and appealed for political leaders in the region and around the world to “take on the responsibility”.

A French-Egypt ceasefire proposal appeared to be gaining some traction early on Wednesday, with the US giving qualified backing and Mahmoud Abbas, the Palestinian president, supporting the deal.

Israel has said it was taking the proposal “very seriously” but was still considering its response.

Pressure mounted at the United Nations late on Tuesday for Israel to stop its offensive, with Abbas calling for “urgent intervention by the security council to … deter the aggressor”.

But Gabriela Shalev, Israel’s ambassador to the UN, said that the Gaza offensive was a “pre-requisite” for, not an obstacle to, peace. 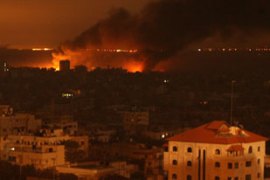 Israel closes in on Gaza City

Witnesses report big explosions and intense fighting near centre of the city. 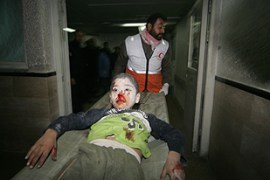 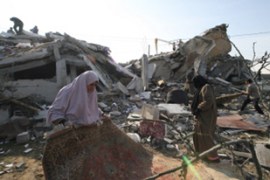 World body’s humanitarian chief contradicts Israeli assertion that there is no crisis.